Diatoms and me go way back. Ok, not so much. Even though I successfully forgot that one of my high school biology exams was on the recurrence of Tabellaria flocculosa on a lake, my first “real” experience with diatoms stems from the moment my professor at the University of Barcelona, Jaume Cambra, read my name.

After procrastinating with student work for a while, I finally got the chance to visit said office, and there were the wonderful slides from a small river in Solsona, a place in the north of Catalonia with their abundant Achnanthidium and Eunotia. Next to the slides, four books that would accompany me quite a while: the four tomes of the “Süsswasserflora von Mitteleuropa” on Bacillariophyta, written by Krammer and Lange-Bertalot. I enjoyed the time at the microscope, and seeing diatoms moving in their life samples for the first time was a hoot. They have been a constant in my life from then on. My Bachelor’s, Master’s and doctoral theses looked into Mediterranean diatoms, their taxonomy -with stints in Berlin with Regine Jahn and her team-, their ecology and physiological responses – which brought me to Bánk Beszteri’s team. And I have always been fascinated with their weird position in the tree of life. I always liked things that stick out, the “odd man out”. And what sticks out more than a “plant” that moves around?

Even though my pre-doctoral work was on continental, benthic river diatoms, I am now going to branch out a little, and will investigate epiphytic diatoms from Antarctica in a short scholarship coming up. Currently, I am working at the Alfred-Wegener-Institute Helmholtz Centre for Polar and Marine Research as a technician, participating in taking care of the Hustedt diatom collection and keeping cultures of Antarctic diatoms alive (mostly Fragilariopsis kerguelensis (O’Meara) Hustedt).

One of the most important things that I got told by my professor was to try and attend to all congresses and symposia that I could. I mostly financed myself, with some help of the department, but went to alternate of the now extinct (or re-named) “Central European Diatom Meetings”. In one of those, Prague 2017, as I was the only member of my working group present at these meetings, I was approached by Hannah Hartung, who talked about the plan to create an international network for early-career researchers (ECRs) in diatom research. I liked the idea and volunteered to help in response to her e-mail. I had gained some experience in the early-career researcher organization with the Iberian part of the Association for the Sciences of Limnology and Oceanography (ASLO), called the AIL, where I had participated in organizing a “statistics with R” course, and wanted to see if I could bring something to the team.

Young diatomists originally, now called Young ISDR, started with a core team based on Hannah and another young AIL member, Xavier Benito, now working in the USA. Even though it was a lot of extra work, it was great fun to create this blog and organize activities around the International Diatom Symposium in Berlin last year. Without a trace of shame I will say that I think that our monthly skype sessions really showed in the organization of the Young ISDR activities, and that all of the Core Team members gave a lot of time and did splendid work 😊. In this symposium I was elected new ECR representative, to accompany and learn from Hannah for two years, before taking the next ECR representative under my wing next year, in 2020 in Yamagata. In Berlin, we also welcomed an increase in our Core team, with Mia Otto and Chetan Gaonkar as active volunteers for several projects. 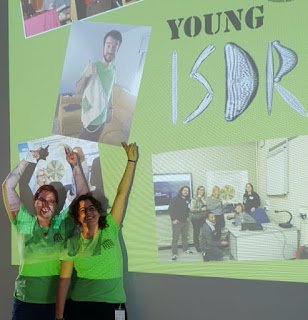 I believe that early career researchers all over the world deserve a good network of their peers, and living in the 21st century as we do, I think that it is only right that Young ISDR is based on the web and social media, to assure international connectivity. We have been very active with several projects (diatom children’s book, diatom of the month monthly posts, and the preparation of new projects). I would love to cooperate closely with other, closely linked ECR-networks such as PAGES and IPA bringing as many people working with diatoms together. If you would be interested in helping Young ISDR in any way, curating the blog, organizing meeting linked or unlinked workshops, please contact us. We would be honoured to have you as a volunteer!