by by Demetrio Mora | 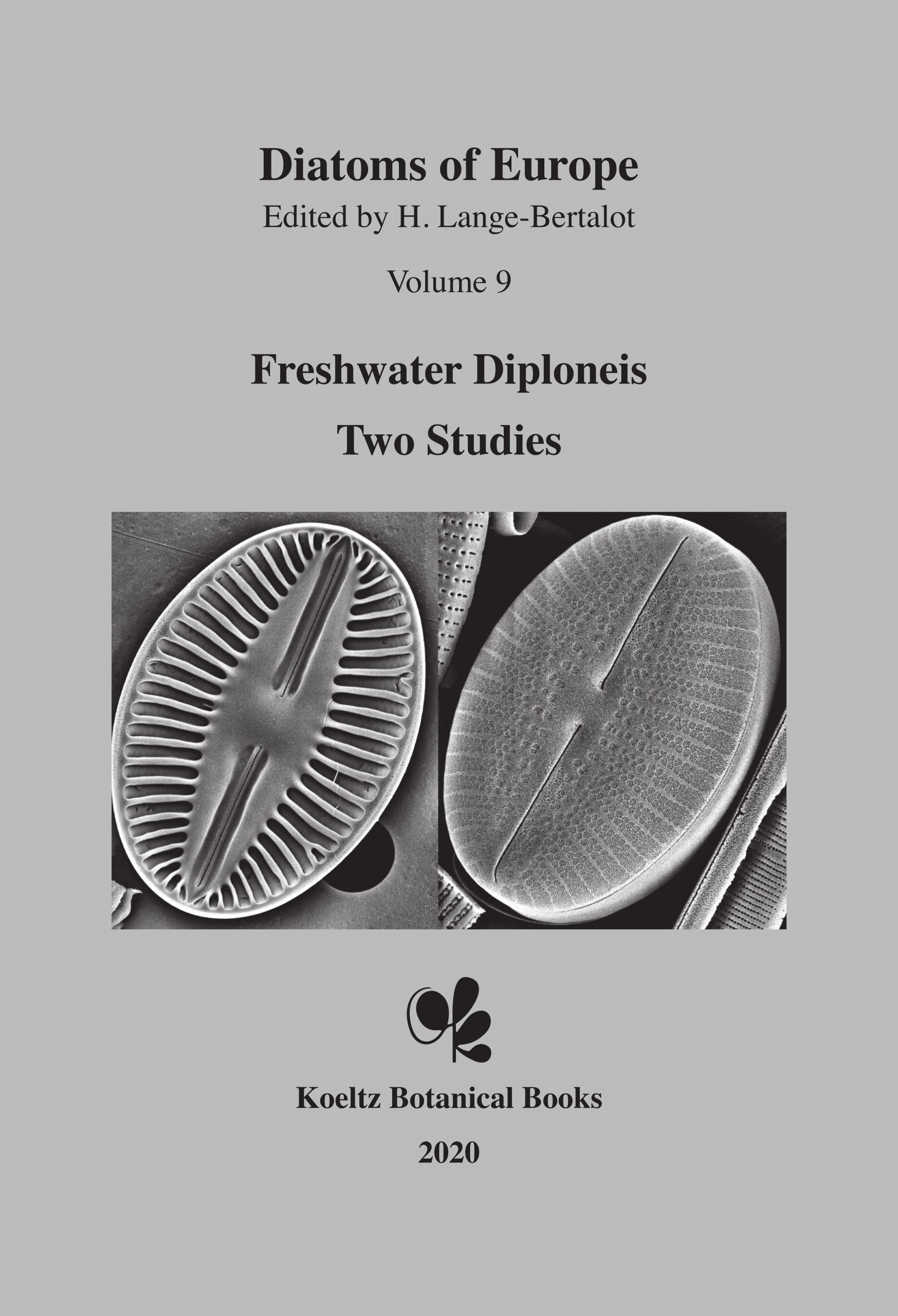 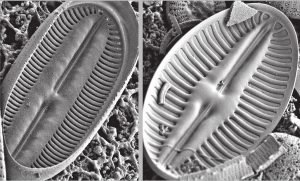 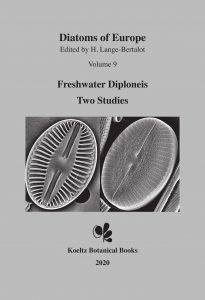 Despite assertions that its diversity is predominantly marine, recent studies are demonstrating that the diatom genus Diploneis Ehrenb. ex Cleve holds a higher diversity in freshwaters environments than previously thought [1, 2]. One of the main impediments to species discovery of this genus in limnic environments might be its rarity, in the sense that it most often displays a sparse distribution and low abundances [3]. This is reminiscent of the Pinnularia borealis species complex, which is likewise a rare diatom that has been found to harbour an incredibly large cryptic species diversity [4].

According to the multipliers proposed to be applied to the number of species already known in selected genera or species complexes, to estimate their actual extant species diversity, this multiplier lies at x9.5 for the Diploneis smithii/fusca group [5]. Despite this group inhabiting the marine benthos, it seems that this multiplier might well be applicable to Diploneis from freshwater environments, as perfectly exemplified in volume 9 of Diatoms of Europe, a treatise dedicated to freshwater Diploneis, in which 75 new species are described, including eleven new species only found outside of Europe. This volume, divided into two studies, represents the most extensive work on Diploneis to date. These two studies examine 125 infrageneric taxa in total, including the description of 66 new infrageneric taxa in the first study [6], and nine in the second [7].

This volume is well organized, with very detailed morphological diagnoses, also providing comparative descriptions, as well as remarks on the ecology and distribution of the taxa. The comparative table of morphometric data included in the first study will surely be very welcomed among the users of this monograph, allowing for a quick comparison of several taxa instead of going back and forth through countless descriptions.

The main point for improvement of this volume relates to the quality of the light microscopy (LM) and scanning electron microscopy (SEM) microphotographs in the second study. They are of variable quality, offering very good resolution for some taxa (e.g. D. exigua Jovanovska, Levkov & Edlund) as well as low resolution for others*, in some cases not allowing to readily visualize the details that the authors point out to in the descriptions. In contrast, the LM and SEM microphotographs in the first study are outstanding, such as for the newly described D. galloprovincialis Lange-Bertalot, Fuhrmann & V. Peeters, as well as for D. werumiana Lange-Bertalot, Fuhrmann, E. Jovanovska & Levkov. Another point relates to the newly described D. submarginestriata Jovanovska, Lange-Bertalot & Levkov. It is confusing that both studies refer to its holotype under different slide numbers, leaving the reader to assume that the correct slide number should be the one in the protologue?

In spite of being part of the series “Diatoms of Europe”, it is of considerable value that this monograph is not limited to describing and critically comparing populations of species found in that continent, providing a more inclusive outlook to the diversity of the genus in freshwater ecosystems. This broader sampling also contributes to making more assertive claims about species distributions.

The authors of the first study propose a subdivision of the genus into three subgenera, i.e. Diploneis, Cribradiploneis Lange-Bertalot & Fuhrmann, and Volaediploneis Lange-Bertalot & Fuhrmann [6]. They also make a plea for maintaining the genus in its current circumscription, which they claim to be justified by the H-shaped silica complex that serves as a “stabilising cell skeleton” across the species that make up this genus [6]. Such a claim seems to be supported by molecular phylogenetics [8], which renders Diploneis as a monophyletic group. Despite the limited taxon sampling of the genus, this is the first molecular phylogeny presenting multiple Diploneis strains [8], i.e. 14, with all except one being marine, i.e. UTEX FD282 [9]. Apart from that strain, there are only two other Diploneis strains from freshwaters in publicly available nucleotide sequence databases [10]. This poor representation might be due to the difficulties in producing clonal cultures of this genus [11]. However, further efforts in gathering molecular data from freshwater and marine Diploneis taxa might well continue to support the monophyly of the genus, and reaffirm the recommendation of Lange-Bertalot et al. [6] maintaining its current circumscription. Additionally, integrative taxonomic approaches will most certainly further uncover the hidden diversity within this genus, in a similar way as researchers have done for other genera [12, 13].

All things considered, volume 9 of Diatoms of Europe is a valuable work presenting an excellent treatise of the genus Diploneis from freshwater environments, highly recommendable for any institution and individual dedicated to the taxonomy of diatoms. Additionally, it will certainly be a useful identification tool for ecologists, hydrobiologists and palaeolimnologists.

Both pictures included in this review, from the front and back covers of the book, were made available by and are here reproduced with authorisation from the publisher.

Big news from Belgium!
Who's in for the 14th European Diatom Meeting from 9-11 May 2023 in the beautiful venue of Meise Botanic Garden?
https://sites.google.com/plantentuinmeise.be/edm-14-meise-botanic-garden/homepage

Look at this interesting opportunity

📢 Interested in how DNA-based methods can improve our understanding of freshwater aquatic ecosystems? This PhD position focused on diatoms could be for you https://euraxess.ec.europa.eu/jobs/61140
Deadline: 6 Feb 23
Place: wonderful Aveiro, Portugal; Salomé Almeida & David Mann as supervisors

Happy #PhycologyFriday! Please help spread the word-I am looking for students interested in a MS degree. Project is flexible but will be focused on #stream ecology & the contributions of benthic #algae to functional measures of stream restoration. DM me to start a conversation.

To all our PAGES ECN community: It's always good to take a few second and update you PAGES profile down here:

Come by and roast some marshmallows with other diatomists. Organized by #PaulHamilton

This could be you! Applications are open for our PAID internship program @FLBSUM . Spend summer on the shores of spectacular Flathead Lake. Please retweet!
https://flbs.umt.edu/newflbs/education/summer-internships/ @umontana

Come and work with us! This is a great opportunity if you are interested in field measurements and coordinated mesocosm experiments within @SITESAquaNet, @fieldsites and @aquacosm. https://twitter.com/fieldSITES/status/1603057272565161989

Erken Laboratory (Uppsala University) has an open position for a research engineer in 2023 to coordinate mesocosm experiments within @SITESAquaNet as well as aid lake monitoring and field measurements connected to SITES Water.
Apply here by Jan 13, 2023: https://www.uu.se/en/about-uu/join-us/details/?positionId=575765

I am recruiting postdocs and graduate students for multiple projects on wetlands, water quality, bio energy and nature based solutions. If you are at #AGU22 and would like to meet to discuss opportunities send me a message

Job alert. Our lab is hiring! We are looking for a PhD student or Postdoc to work on #diatom biomineralization using biochemical, molecular genetic and cell biology tools. 🔬🧬

Excellent tenure-track opportunity for a Fisheries person interested in teaching at a liberal arts college in an up-and-coming small town surrounded by water and forest https://www.northland.edu/job/assistant-or-associate-professor-of-natural-resources-and-biology-fisheries-scientist-fish-biologist/