Diatom blooms and their effects on human health 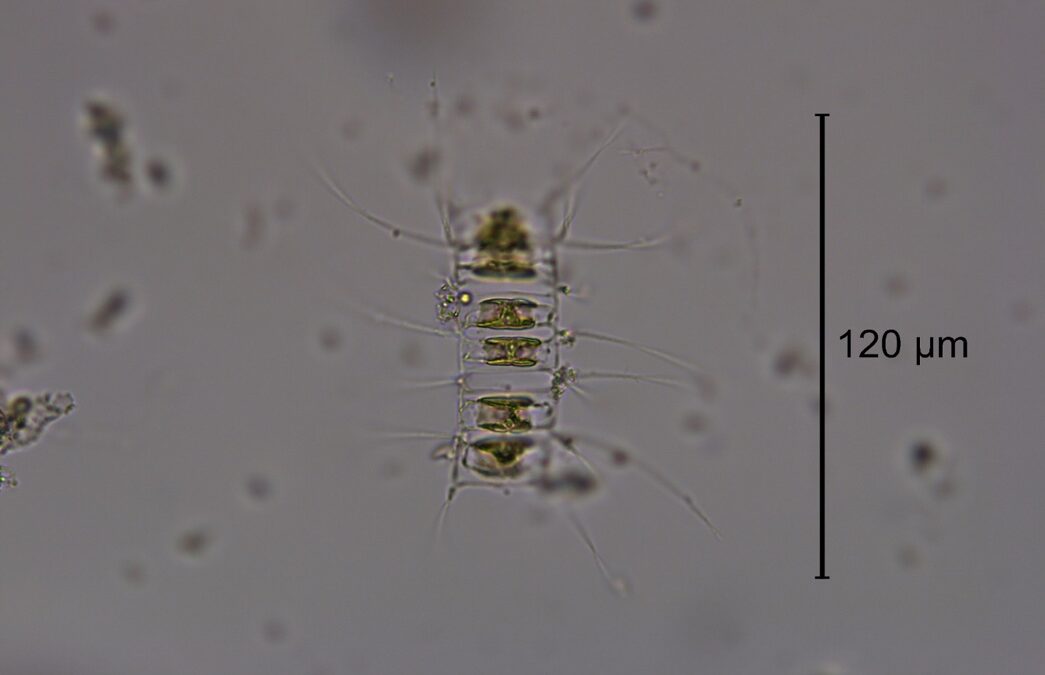 Humans have long benefited from algae in many ways; from breathing the oxygen released during photosynthesis or consuming algae and organisms that feed on algae, to using their components and extracts in everything from foods to fuels, medicines and cosmetics. However, as Paracelsus wisely said, “All things are poison, and nothing is without poison, the dosage alone makes it so a thing is not a poison”. While algae are not a problem per se, too many algae can be an issue, just like too much sugar in our diet may negatively impact our health.

Many types of algae, including cyanobacteria, dinoflagellates and diatoms, can generate massive populations with densities greater than 15,000,000 cells per liter, stretching for hundreds or even thousands of square kilometers in water bodies (Bates, Garrison, Horner, 1998). These blooms can proliferate and dieback in a matter of days or return seasonally for decades. Some algal blooms pose no threat to other life forms, and simply provide an abundant food source for various predators, like when Aulacoseirablooms under thick ice in Lake Baikal (Kostrikina, Shimaraeva et al 2013). However, in other instances impacts may be catastrophic. Hazardous algal blooms have cost lives and resources and continue to worsen with global climate change, which tends to select for noxious and toxic algae, as many of these organisms are favored by warmer waters (Paerl & Huisman, 2008). 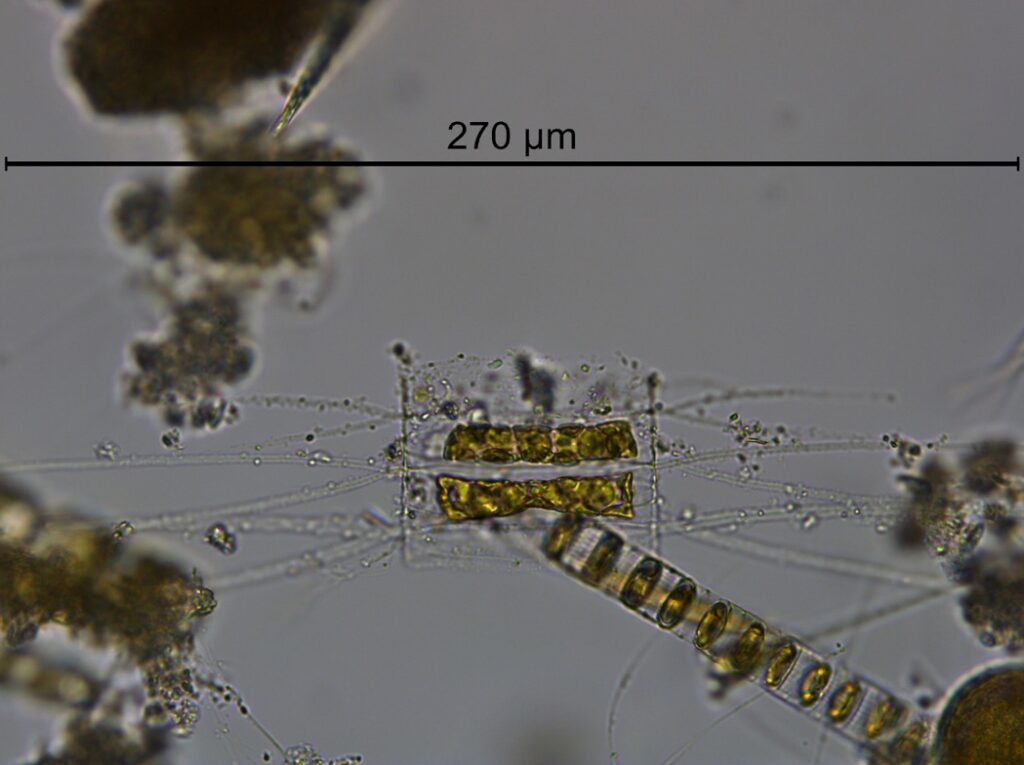 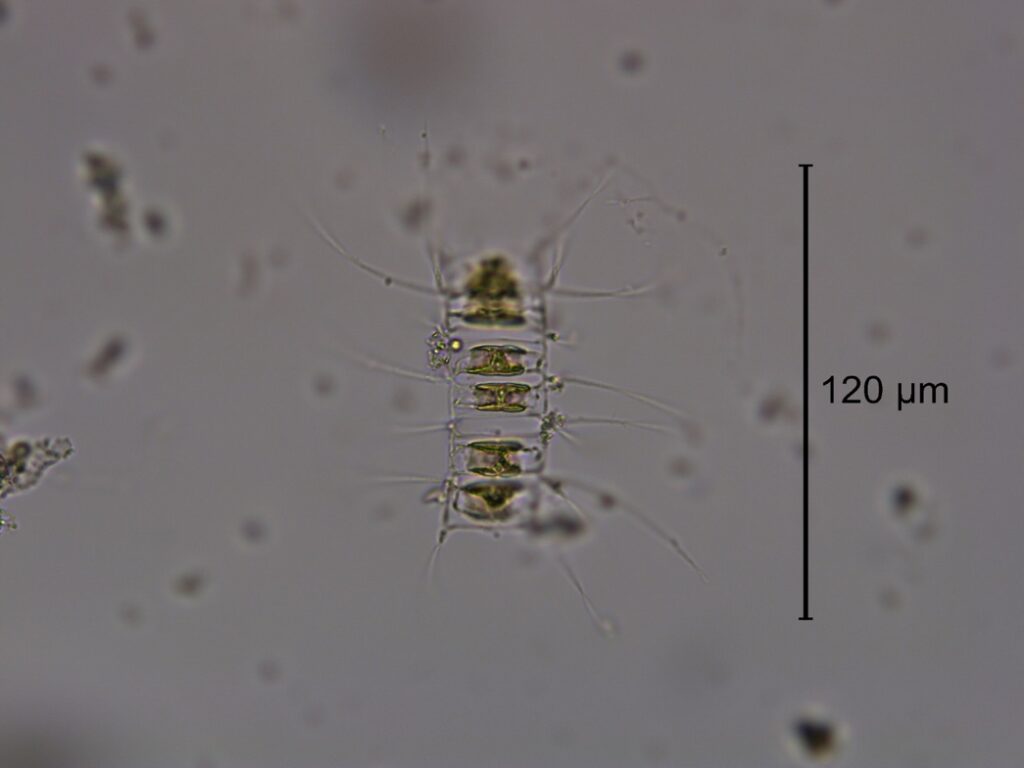 Diatom blooms are dynamic system events during which certain photosynthetic single-celled organisms able to exploit both biotic and abiotic factors become dominant. Blooms can involve more than one type of microbe and often result from and influence interactions between predators and prey. Diatoms are part of the algal community sometimes referred to as “hard algae” because of their silica frustule that is often ornamented with elaborate spikes, thorns, or spines. While these structural adaptations are known to confer advantage by facilitating suspension in the water column, they also can serve as effective predatory defenses. Some diatoms are capable of forming long filamentous ribbons or chains and may also have spines or sharp projections. When these species bloom, their anatomical enhancements cause serious or fatal injury to predators as can happen with many Chaetocerosspecies clogging or puncturing fish gills with their needle-like setae (Figs 1 – 3) 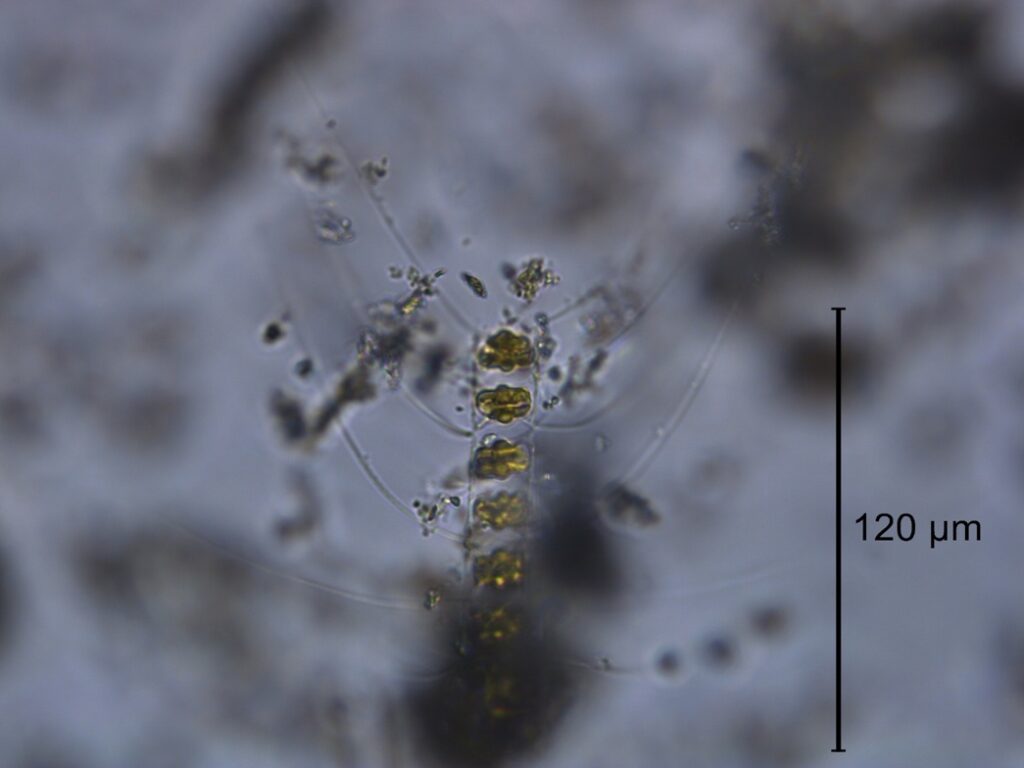 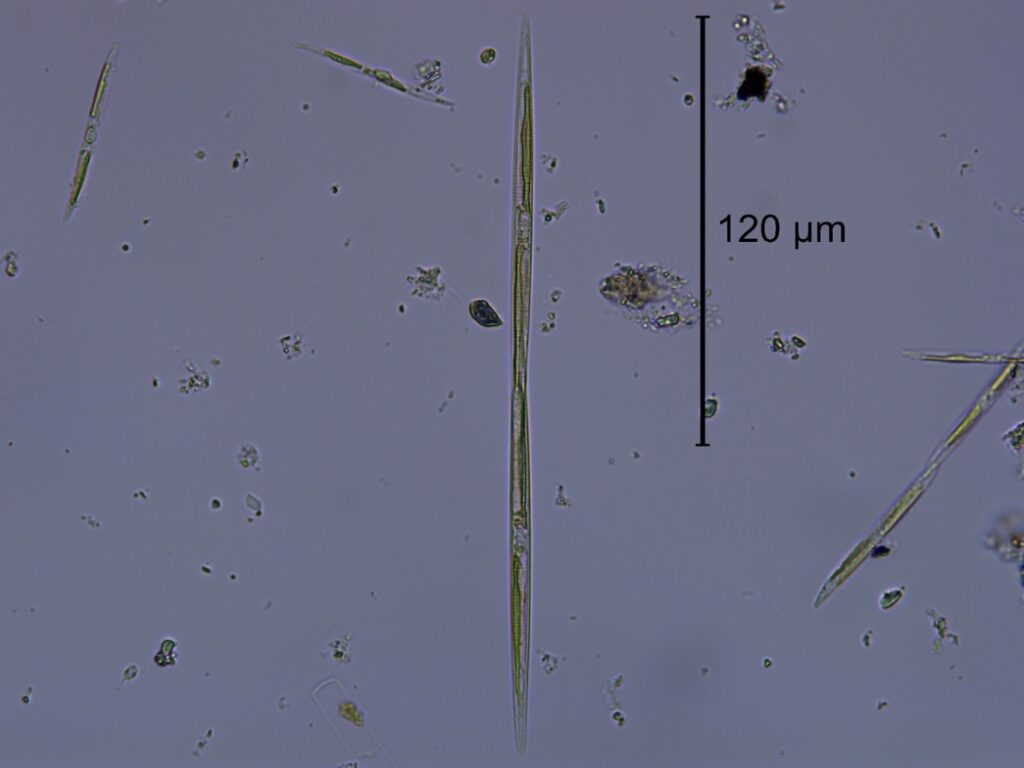 Even after a bloom dies off, toxins may persist for weeks or longer dissolved in the water, affecting rate of feeding, reproduction and development in multiple organisms such as zooplankton, clams, crabs, anchovies, albacore, pelicans, dolphins, sea lions, whales, rodents, primates and humans (Lefebvre, Bargu et al 2002). Mass wildlife mortality events have also been linked to domoic acid (Smith, Connell et al 2018). Toxins can bioaccumulate in diatom predators like mussels and scallops, concentrating the domoic acid in their tissues. These organisms may later be consumed by higher predators which unknowingly ingest lethal phycotoxins. These algal poisons can interfere with neuronal development, cause illness, epilepsy, paralysis, limbic system damage or death in the unlucky victim. Symptoms of DAP include gastrointestinal cramping, nausea and vomiting, seizures, death, disorientation and memory loss ranging from temporary to permanent amnesia. The first deaths linked to DAP from Pseudo-nitzschiawere three elderly people who ingested contaminated mussels in 1987 (Bates, de Freitas et al 1989), leading to increased monitoring efforts and research. Periodic detection of these toxins has closed fisheries and aqua-farming operations until their products test clean.

The beauty of diatoms belies the potential deadly effects of some species. While it is difficult to directly affect bloom conditions, reducing nutrient loads helps limit uncontrolled algal growth. Diatom blooms have been studied for centuries to record water quality changes and increase awareness of the potential deleterious or deadly health consequences for the many lifeforms in contact with the affected water bodies. Tracking bloom dynamics is fundamental to better understand how toxin formation is stimulated and the scale and duration of blooms can be limited and their impacts mitigated.

Please leave a comment below or email Kyle if you have comments or questions about the post.