Choosing Frank Round as a PhD supervisor in Bristol was my route into working with diatoms, although it took about 6 months until we hit on the topic that became my PhD project. (Fortunately I had also been appointed as a departmental demonstrator so was not constrained by 3 years of funding!) Prior to beginning with diatoms, I worked primarily with green algae, whose identification and taxonomy depend on a different set of criteria to those traditionally employed for diatoms. Furthermore, I was also investigating tube-dwelling diatoms, so examining living material was critical to that, and I never lost the habit.

Following Bristol my career took on a somewhat peripatetic character with a series of research fellowships that both allowed and encouraged diversification, while building on experience. Thus, work on tube-dwelling species that span a number of genera led to the recognition that the existing taxonomic treatment of those taxa was inadequate, and that more detailed taxonomic work on naviculoid taxa (Oxford) was necessary. At that time Navicula was something of rag-bag, which the application of SEM and live observations revealed to be in need of revision, and thus the discrimination of more narrowly defined genera, including the resurrection of historical genera, began.

As the end of my Oxford research fellowship loomed, I was alerted to a Royal Society scheme to encourage European exchange fellowships to develop early career researchers and identified culturing and life history studies of diatoms as an area I would like to develop. That, together with a need to improve my German (at that stage much of the diatom literature was in German) took me to Sylt and the Biologische Anstalt Helgoland to work alongside Gerhard Drebes. Situated in the far north of Germany, this was a somewhat isolated existence, but the experience of growing diatoms and following their life histories provided clear evidence that diatoms do not reproduce their valves precisely at each division, but are subject to change with size, sometimes with significant taxonomic implications.

Although I had originally thought that I would only spend a year in Germany, an unplanned meeting with Barbara Meyer (Hickel) from Plön (Holstein) led to a move down to the Max-Planck-Institute for Limnology. Thus from working with marine benthic taxa, I moved to looking at the benthic diatom flora in lakes, and the interaction of diatoms with light, sediment and season. Again, much of the time I was looking at live material, so excluding the inclusion of dead material in my analyses, yet becoming aware of the contrasting ecological demands of different taxa. From lakes, there was another move further south to work in their running water station on the Breitenbach stream system near Schlitz (Hessen). I might have been the only phycologist, but working alongside colleagues from different disciplines underlined the importance of understanding the range of interactions in aquatic ecosystems.

After over 8 years (not the planned one) in Germany, I returned to the UK, initially working with an ecotoxicology group in Sheffield before obtaining a NERC Advanced Research Fellowship to return to diatoms. With the fellowship funding I aimed to use experimental studies on the growth of different diatoms to understand their ecological responses, given their use as environmental indicators. This was not without its challenges, but provided some interesting results before the opportunity of a permanent position at the Natural History Museum arose.
At the museum, with the combination of its collections, library, microscopical facilities and laboratories, I sought to bring together the different strands of my past experience, integrating experimental work with more traditional taxonomic work. In addition, I was able to develop different collaborations and, particularly through PhD students and post-doc colleagues, explore different questions and use different approaches, extending to working with computer scientists and mathematicians! Working across disciplines means that all participants must be able to explain their own ideas extremely clearly to ensure full understanding, but it also means that preconceptions are challenged and very exciting new conclusions can then emerge. 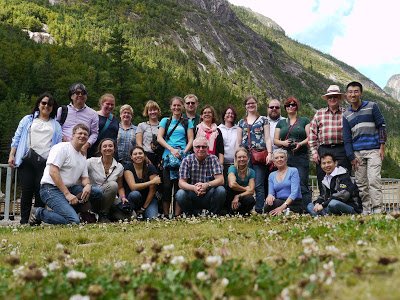 My links with ISDR go back before its beginnings, as I attended the 4th Diatom Symposium in Oslo in 1976, almost 10 years before the society was officially formed in Paris! Although I have not managed to attend every International Diatom Symposium, I have seen the society develop and the diversity of membership expand, and am delighted with the growth in young student members. Like Ric Jordan, I was also familiar with the British Diatomists’ meetings, and during my time in Germany was encouraged to initiate the German speaking Diatomists meeting (DDT) in 1987, which has now become the Central European Diatom meeting and is still going strong. The value of national, European and international meetings cannot be over-emphasised. Being able to come together with others to hear new ideas, learn about progress in the subject and make new connections and friends, keeps the discipline alive and developing.

The initiation of Diatom Research as the society’s journal provided a platform for diatom focussed research and the continued growth of the journal is a testament to the vitality of the area. While it continues to publish taxonomic and systematic work, any aspect of diatom research can be submitted, and I would like to see greater diversity in submissions, so that it really reflects the full range of diatom research today. Being Editor-in-chief means that I see all the work that is submitted, although the Associate editors are responsible for finding reviewers and evaluating the quality of submissions before forwarding them to me for a final recommendation. It cannot be too strongly emphasised that their work is fundamental to the quality of the journal, although I often spend quite a bit of time helping polish the final versions. (Here I would also put in a plea that authors follow journal instructions as closely as possible!) Similarly, having individuals who are willing to review submissions is essential to maintaining the quality of the journal, and I would encourage everyone who wants to have their work published to see that being prepared to review papers is part of their contribution to the research area.
Any society and its activities are dependent upon membership, and the extent to which members are prepared to invest in that society. Involvement takes time and energy, but the benefits far outweigh the investment, both professionally and personally. International Diatom Symposia began in 1970 with a small group of 15 diatomists, but the baton has been passed down the line over the years, so that the symposia now attract much larger numbers of individuals from around the world. That has to be a mark of success, but it has only been achieved by people stepping forward to take on organisational responsibility. I hope that long continues to be the case.