by Demetrio Mora and Phillip Jung |

Freshwater phytobenthos comprises the algae that live on or are attached to surfaces of, for example rocks, macrophytes (vascular water plants) or sediment/sand grains of rivers and lakes (Figure 1). As primary producers, capable of generating organic compounds through photosynthesis, phytobenthic organisms are key elements of food webs. Phytobenthos is widely used to evaluate the ecological quality status of freshwaters. As an example, the Water Framework Directive (WFD) of the European Union (EU) requires its member states to evaluate the status of their freshwaters with several biological quality elements, including phytobenthos (Kelly et al. 2009). In most EU states, diatoms are used as proxies or indicators for phytobenthos. Additionally, some EU countries like Germany also use the so-called “remaining phytobenthos” (all algal groups except for diatoms) for ecological assessment (Schaumburg et al. 2004).

For their use in ecological assessment, diatoms and the “remaining phytobenthos” should be ideally identified to species level, traditionally based on light microscopy (LM) observations. An alternative, novel method for species identification is environmental DNA metabarcoding (Zimmermann et al. 2015, Mora et al. 2019), which has already been adopted at country-wide level (e.g in England) to adapt current EU WFD requirements (Kelly 2019). 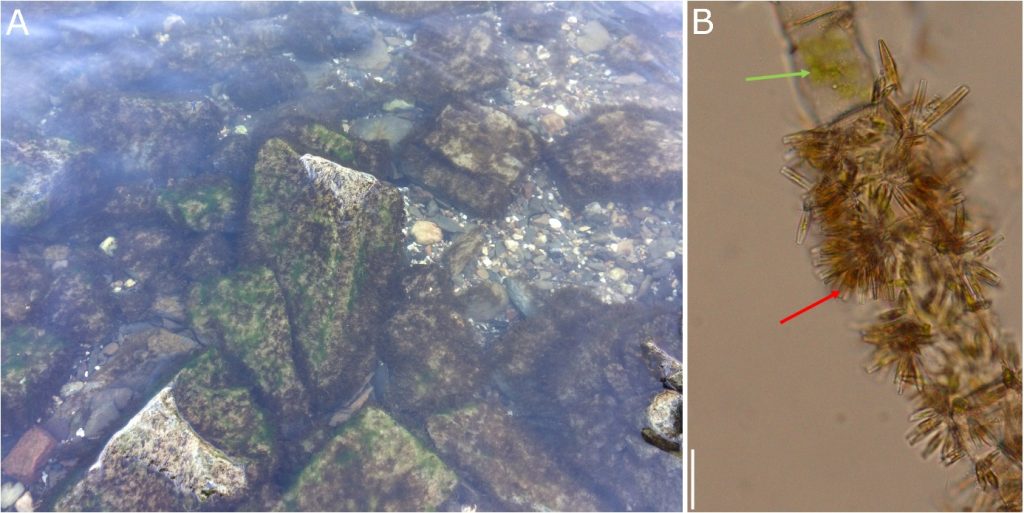 Figure 1. A) Rocks in the Rhine river predominantly colonized by green algae and diatoms. Despite being microscopic, diatoms are easily recognized by their brownish color; some of them secrete mucilage (mucus), making rocks slippery. B) Filament of a green alga (green arrow) colonized by hundreds of diatom cells (red arrow) seen under LM. The scale (white bar) represents 30 micrometers. Photos by D. Mora.

Rocks are the preferred substrates for sampling phytobenthos intended for diatom analyses. It is recommended to sample at depths of 20 to 60 centimeters, ensuring that the rocks were submerged for at least four weeks prior to sampling (Kelly et al. 1998, CEN 2014). But this time frame (four weeks) and depth (20-60 cm) can be particularly challenging to meet in large rivers, where there can be “huge” water-level fluctuations within a few weeks or even days.

We were challenged by this situation during our early-autumn phytobenthos sampling in the river Rhine (Figure 2A). Under our current project, we are evaluating DNA-based methods for investigating phytobenthos and phytoplankton diversity, and its use in ecological assessment of large rivers in Germany. Having no prior experience in sampling large rivers but only small streams and intermittent rivers (e.g. Mora et al. 2017) (Figure 2B,C), we were advised by our experienced colleagues to check the river water-level records of the last weeks, and also the water-level forecast for the next four days, to better plan our sampling and comply with EU WFD standards. 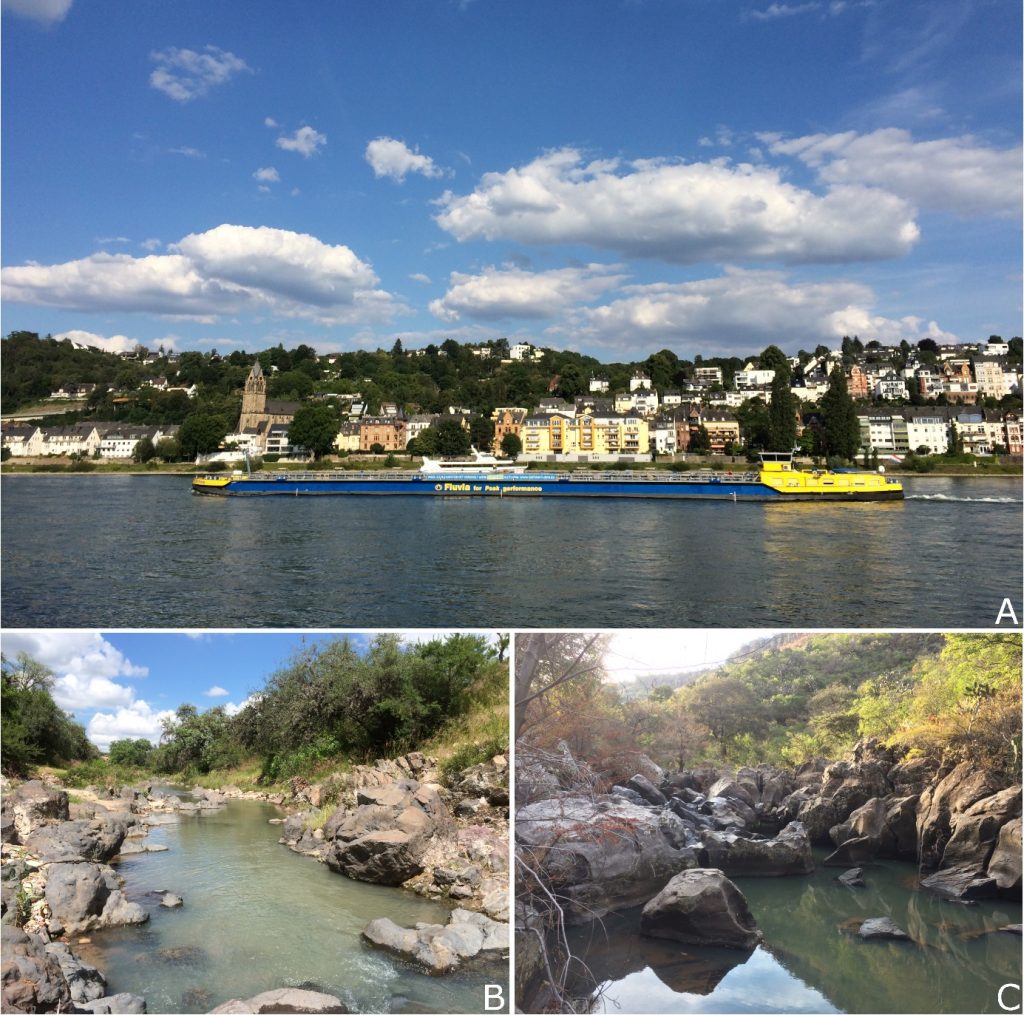 Figure 2. A) The Rhine, one of the major European rivers, is home to unique aquatic biodiversity and is also an important waterway for the transportation of goods; here photographed in the city of Koblenz, Germany, with a width of at least 300 meters and depths of up to 5-6 meters. B & C) Intermittent mountain streams in Central Mexico. In contrast to the Rhine in Koblenz, these streams are not wider than ten meters and not deeper than one meter, making phytobenthos sampling comparatively easier. Photos by D. Mora.

Considering the large water-level fluctuations that occurred during September 2020 (Figure 3A), we decided to conduct the sample collection on the 6th of October 2020. But after consultation of the water-level forecast, we realized that we should conduct our sampling one day before. This was because of a sudden increase of at least 25 centimeters in a single day (from 5th to 6th of October), that would only allow us to sample rocks that were not submerged for 12 days (Figure 3A, green line) during the past four weeks. At the very first stage of our planning, we were even considering sampling on the 8th of October, this means sampling rocks exposed to the air for 25 days during the last month (Figure 3A, orange line). The use of forecasting online tools allowed us to meet sampling standards outlined by the EU WFD. Without these tools, our sampling would have resulted in a species composition characterized by aerophilous species (that thrive in wet surfaces normally exposed to the air for long periods of time), e.g. from the genera Diadesmis, Frustulia and Hantzschia (Rimet and Bouchez 2012). 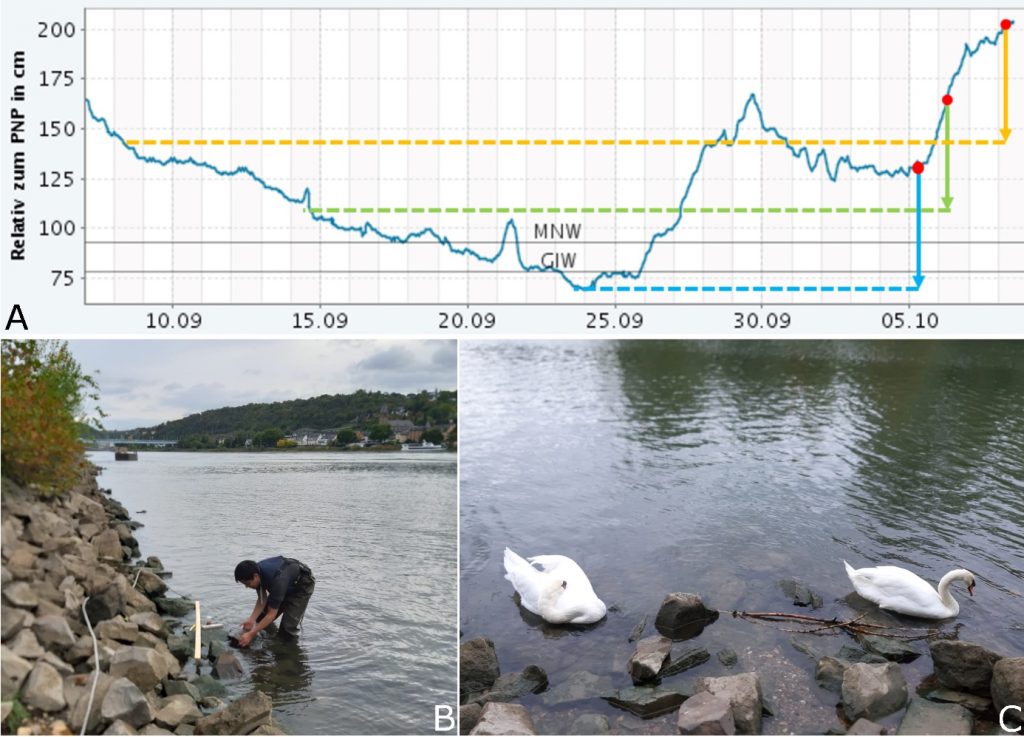 Figure 3. A) Dates initially considered for the sampling, the 6th (green line) and the 8th (orange line) of October 2020, and the actual date it was conducted, the 5th of October (blue line). Water levels in this graph are relative to the specific zero of the gauge, and do not indicate real water depths. Source: PEGELONLINE. B) Safety first: wear the mandatory safety life jacket, and also get secured with a rope during the whole sampling. C) Inspection by some of the inhabitants of the river stretch. Photos by P. Jung.

Another important aspect to take into consideration during a sampling campaign is safety, especially in a river like the Rhine, known for its fast-flowing waters that might seem harmless from the distance. This is why apart from wearing the mandatory safety life jacket, we also got secured with a rope while exploring and collecting rocks from the targeted river stretch (Fig. 3 B, C), also making use of a two-meter wooden stick to first explore the neighboring depths, which can fall abruptly, making the sampling even riskier.

In the end, our pilot samplings went well. And so far, the molecular lab work conducted with the samples collected (Figure 4) is showing promising results for our objective of analyzing the diversity of phytobenthos in large rivers of Germany.

Figure 4. A) Some of the phytobenthos samples collected in the Rhine river, preserved with ethanol to avoid DNA degradation for further investigation of their diatom diversity based on DNA-based methods. B) Pilot test on sample preparation before DNA extraction. Photos by D. Mora.

With this post, we want to draw attention to the big water-level fluctuations that large rivers might experience during short periods of time. All these aspects should be taken into consideration when planning a phytobenthos sampling campaign in such rivers (Chapman et al. 2016). Online resources that keep track of past water-levels (e.g. PEGELONLINE in Germany) and predict its near-future variations have proven to be very useful for this. All in all, this will ensure compliance with sampling standards across Europe for ecological quality assessment purposes under the WFD, making results comparable across regions.

*Part of the title of this blog post, “exploring new territories”, was inspired by Till Macher´s tweet about diatom dna metabarcoding.

Demetrio Mora is a research associate at the Department of Microbial Ecology, Federal Institute of Hydrology (BfG for its acronym in German) in Koblenz, Germany. Phillip Jung just finished his professional training as biology technical assistant and is currently doing an internship at the BfG. Email Demetrio or drop a message below if you have any questions about the post.