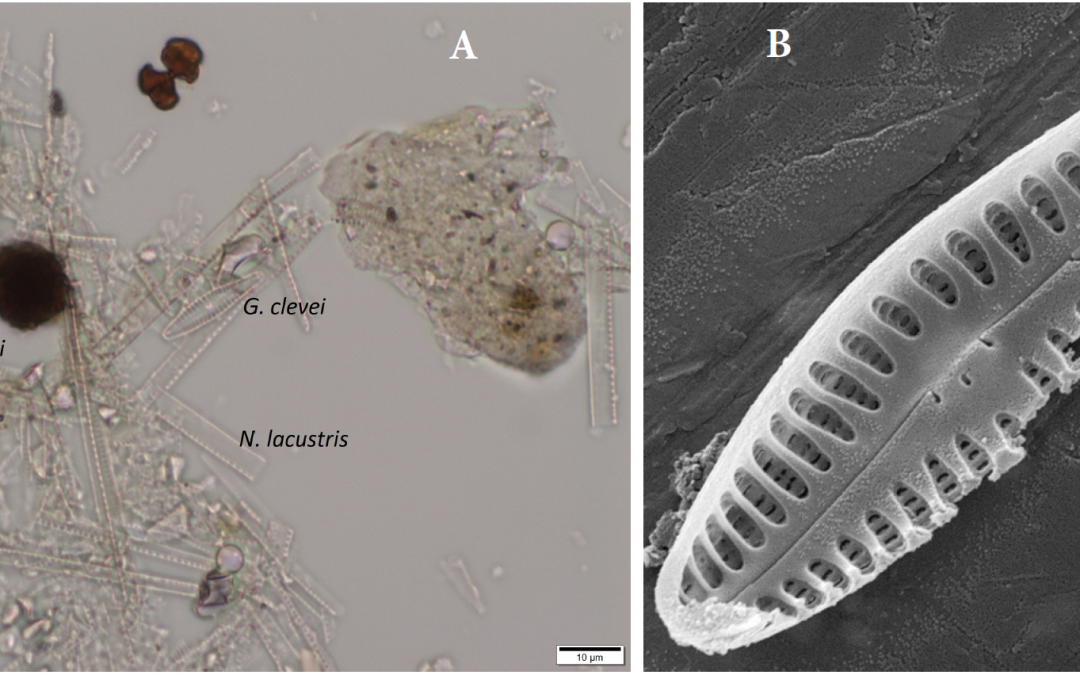 If anything is well known about Lake Tanganyika, it is its enormous volume, length, and depth. Yet, much less is known about the lake’s ecological history and the potential of diatoms to decipher it. The East African rift lake is the longest and second deepest lake in the world, containing about 16% of the world’s available freshwater. Conducting whole lake research is challenging because of limited accessibility owing to the mountainous walls of the rift valley. Finding a representative spot of the entire lake is even more difficult because the lake spans different climatic regions between 3.4°S and 8.9°S. Recently, my colleagues and I took sediment cores from the less studied southern part of the lake to determine how wind-driven vertical mixing behaved in the southern section relative to the northern section during the Holocene. We obtained a core that dates to 8200 years, from a water depth of 680 metres (Figure 1). 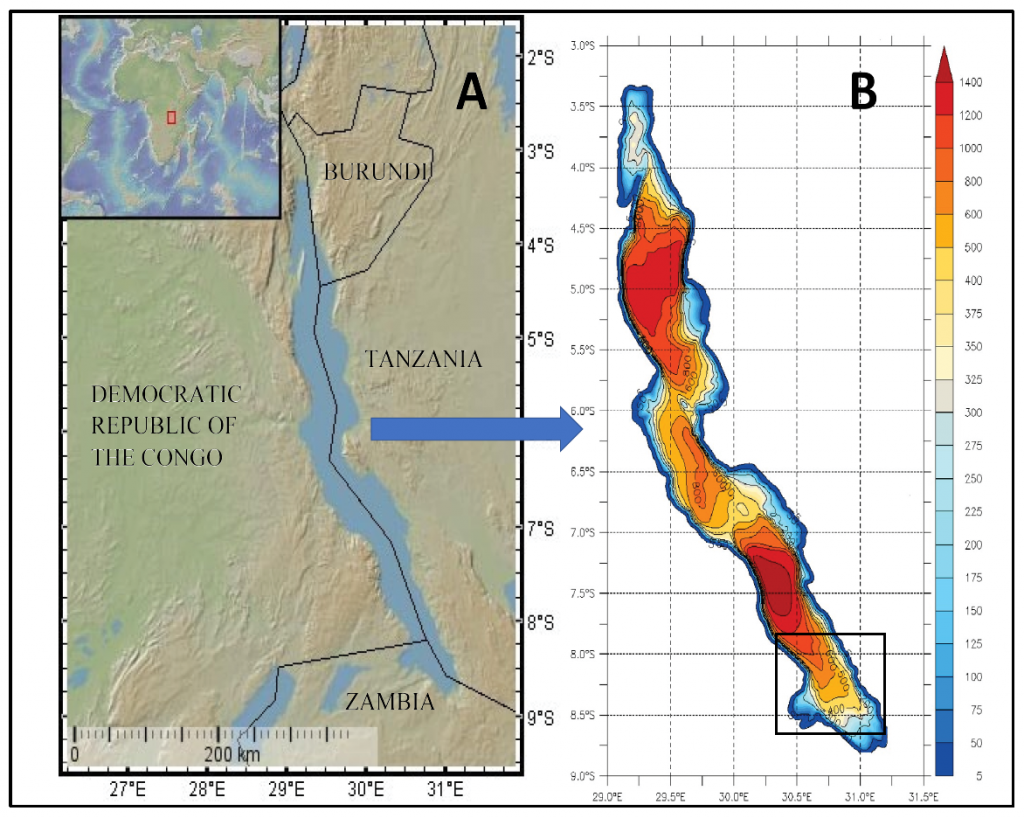 Figure 1: Lake Tanganyika, bathymetry, and core locations. Inset map (panel A, upper left,) shows the position of the lake in Africa. Black box shows the area where cores were taken. (A) shows the position of the lake in the western arm of the East African rift valley. (B) Bathymetric map of Lake Tanganyika (scale in metres) showing the bathymetric basins, based on data compilation from tcarta.com. Base map source: www.geomapapp.org

The most interesting of our findings is that the lake was ventilated to the bottom (680 m) between ~2910 – 1390 cal BP, yet the modern maximum ventilated depth is 300 m in the southern basin (Plisnier et al. 1999). Understanding ventilation depth is crucial for understanding the magnitude of vertical lake mixing, which is responsible for bringing nutrients to the surface of this meromictic lake to fuel up the ecosystem. The amount of lake mixing can be a signal for climate-driven changes in wind speed and water temperatures. During this deep ventilation period, oxygen concentrations were sufficient to support deep-water ostracodes, Gomphocythere downingi (Park et al. 2000), that were living at the lake bottom. It would require very high wind speeds and/or very low lake surface temperatures to avail oxygen to such depths through vertical mixing. If this were the case, we would expect to see no evidence of stratification. However, at the time of this deep lake ventilation, we found diatom species present that are indicators for stratification (Nitzschia lacustris). Since the diatoms indicated whole-lake mixing was not the cause of the deep ventilation, we looked for other explanations.

Among the 170 diatom species found in the core was Gomphonema clevei, a common periphytic diatom found in the shallow littoral zone of the lake today (Figure 2). Finding this species in abundance in the deep pelagic zone at the time of the deep ventilation was a breakthrough because it suggested some form of transport to the depths of the lake. A possible mechanism may have involved runoff of cooler or turbid, denser river waters from the surrounding hinterland into the lake, which could generate strong oxygen-rich underflows down the steep slopes of the coastline into the deep waters of the lake. Cold, turbid, dense underflows of this type occur today in the northern Lake Tanganyika at the Ruzizi River delta (Hecky and Degens 1973; Tiercelin et al. 1992), though deep-water intrusion is limited by the shallow water depths of the northern part of the lake. In the deep waters and steeply sloping coastal area around our core sites in the southern section of the lake, this limitation would be removed. Therefore, dense, oxygen-rich water could penetrate to considerable depths, carrying with it Gomphonema clevei from the littoral zone during this period. Understanding the cause of deep-water ventilation is crucial in this era of global change research because the effects of climate change need to be correctly determined. Gomphonema clevei showed us that water intrusion, not climatic changes, best explains the historical deep-water ventilation of Lake Tanganyika. This diatom helped us solve a mystery that otherwise might have been misattributed, an example of the wide-ranging applications of diatoms. Further understanding of modern diatom species-environmental relationships in Lake Tanganyika will provide insights for more nuanced paleoenvironmental reconstructions (Figure 3). 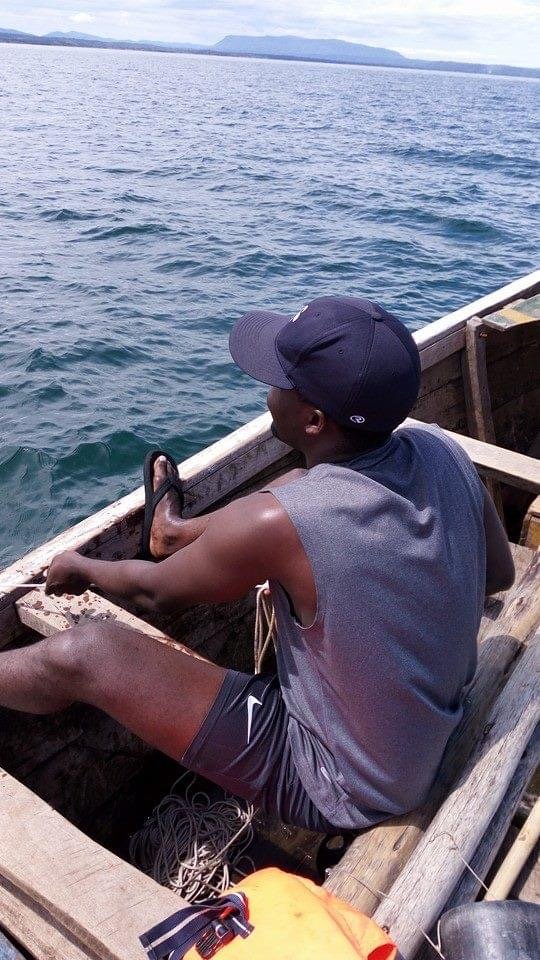 Tumaini M. Kamulali is a PhD student at the Department of Geosciences of the University of Arizona. Email Tumaini or drop a message below if you have any questions about the post.