Hidden Diversity in Pinnularia borealis, and Where it Lives 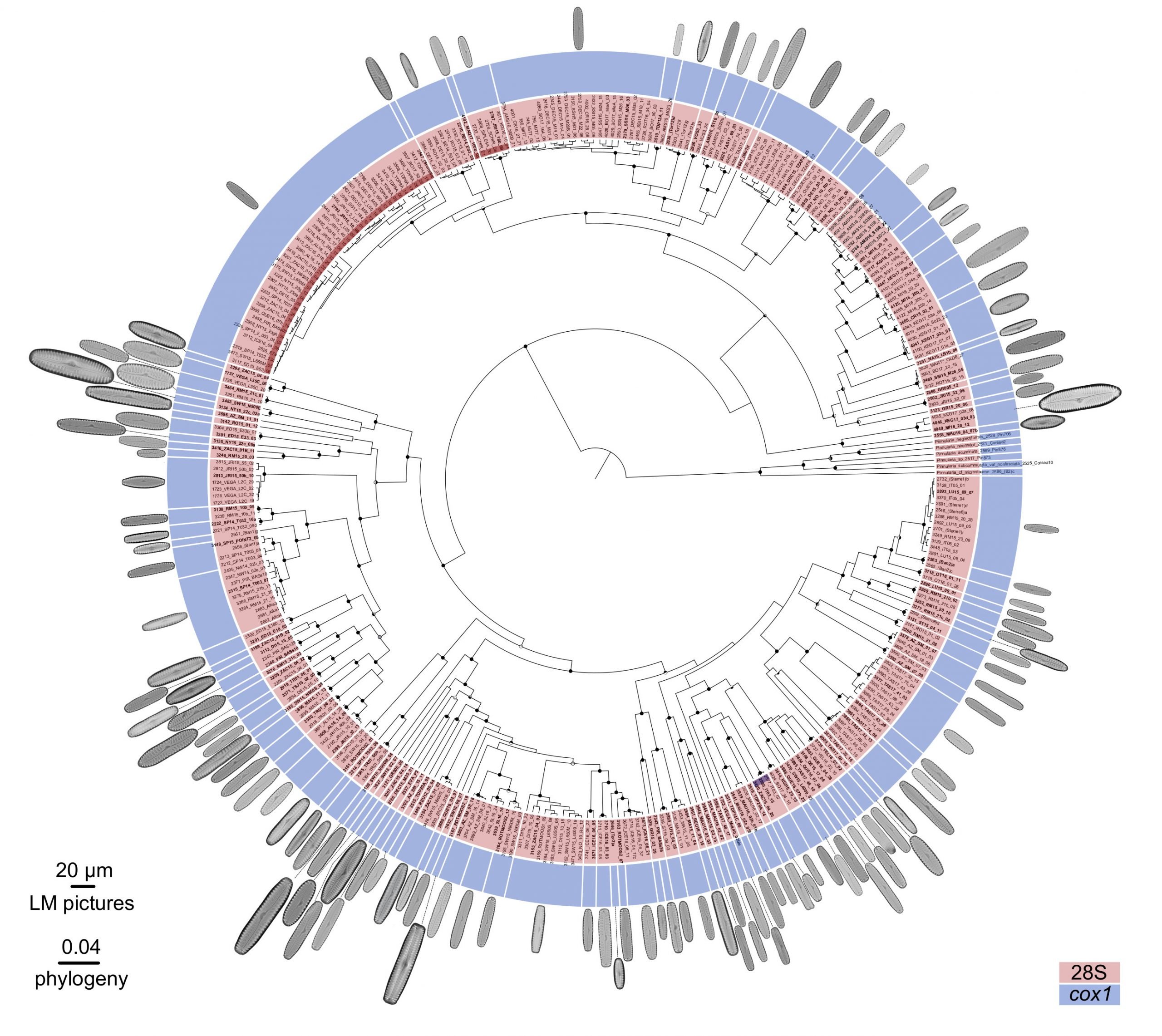 When we think about diatoms, we tend to imagine all kinds of aquatic habitats, ranging from oceans and coastal ecosystems, to lakes, rivers, ponds and puddles. However, soils and terrestrial mosses also harbor a large diversity of diatoms (Foets et al. 2020). Genera like Hantzschia, Luticola, Muelleria, Humidophila and Pinnularia thrive in terrestrial habitats around the world (Figs 1a,b). Terrestrial diatoms are part of a complex community of soil bacteria and protists that over the last decades has received comparatively less research interest than their aquatic counterparts (Geisen et al. 2017). Although soil micro-organisms drive the global carbon and nutrient cycles that underlie essential ecosystem functions (Crowther et al. 2019), we are only beginning to grasp the drivers of terrestrial protist diversity and biogeography.

During my PhD, I ventured into the exciting world of terrestrial diatoms. My goal was to gain a better understanding of their diversity and biogeography, by using a single diatom species complex as a model system: Pinnularia borealis (Figs 1c-e). A species complex is a group of closely related organisms that are so similar in appearance that they are often lumped together into a single species or multiple, very similar, species. The P. borealis complex is found in terrestrial environments such as moist to dry soils and mosses around the world. It occurs on all continents, and even on the most remote island of the planet (Bouvetøya; about 1700 km north of Continental Antarctica). Pinnularia borealis species are survivors: they are well-adapted to desiccation and extreme freezing events (Souffreau et al. 2013). For example, P. borealis cultures can withstand temperatures as low as -180°C (Hejduková et al. 2019). Although P. borealis is globally distributed, using an environmental metabarcoding dataset, I found that its abundance, relative to many other protists, is usually very low (Pinseel et al. 2020). 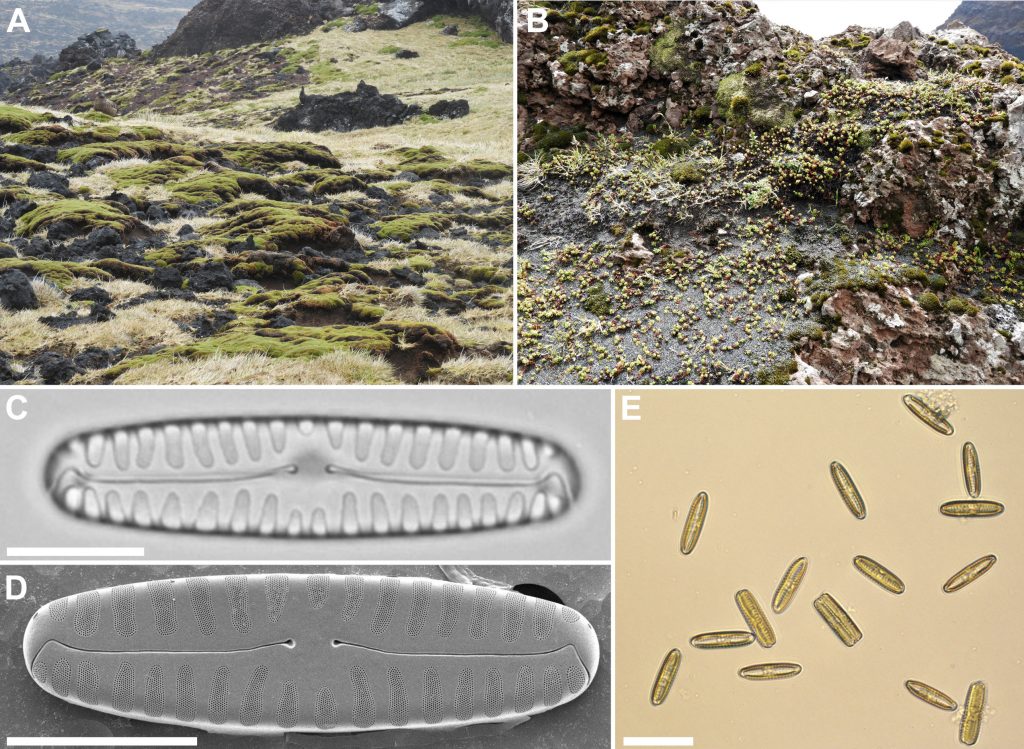 It is unclear exactly how diverse the P. borealis complex is. DiatomBase lists 66 varieties and formae (Kociolek et al. 2020), and many other taxa have been erected to species level (e.g., P. rabenhorstii). The majority of described taxa shows considerable overlap in morphological features, resulting in an uncertain taxonomic status. Using morphometric techniques, i.e. shape analysis on LM micrographs in SHERPA (Kloster et al. (2014), and detailed examination of SEM micrographs, ) on P. borealis cultures that were genetically distinct in a molecular phylogeny, I found that many lineages do not show (a combination of) unique morphological features (Pinseel et al. 2019). In other words: the molecular diversity in the P. borealis complex is larger than morphological variability suggests, indicating the complex harbors cryptic diversity, that is, overlooked diversity due to morphological similarity. Unique morphological character combinations have occasionally evolved within the complex, with P. catenaborealis being a good example (Pinseel et al. 2017). Nevertheless, it is clear that to truly understand the diversity of the P. borealis complex, molecular data are indispensable. 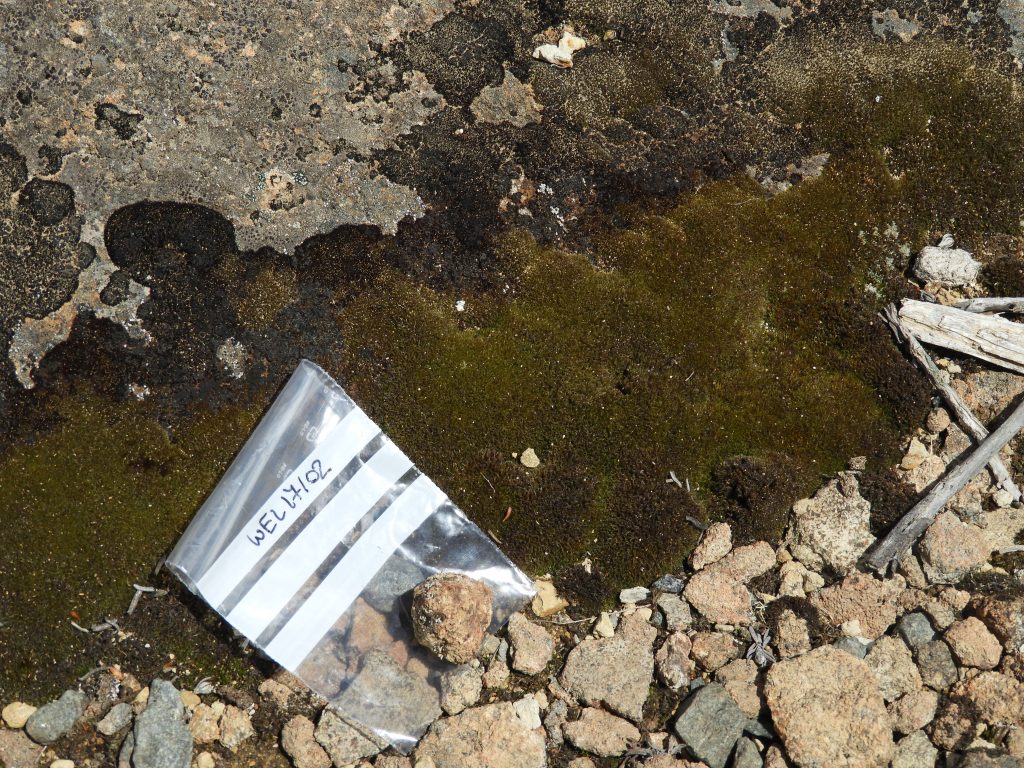 To investigate P. borealis diversity, I built a database comprising >1500 environmental samples (Fig. 2). These samples were collected all over the world, but the focus was directed towards temperate European regions, as well as the High Arctic and Antarctica (Fig. 3). Because it was impossible to travel to all these places myself, I am very grateful to all those researchers, including many ‘diatomists’, who have shared samples over the years.

Upon arrival in the laboratory, I screened all samples in a light microscope. Whenever I observed P. borealis, I manually isolated single cells using a micropipette and a needle, and grew them in culture. This resulted in a collection of >800 monoclonal strains (Fig. 4). Building this culture collection took more than three years, countless hours in the laboratory, and piles of tubes and well plates in climate chambers. 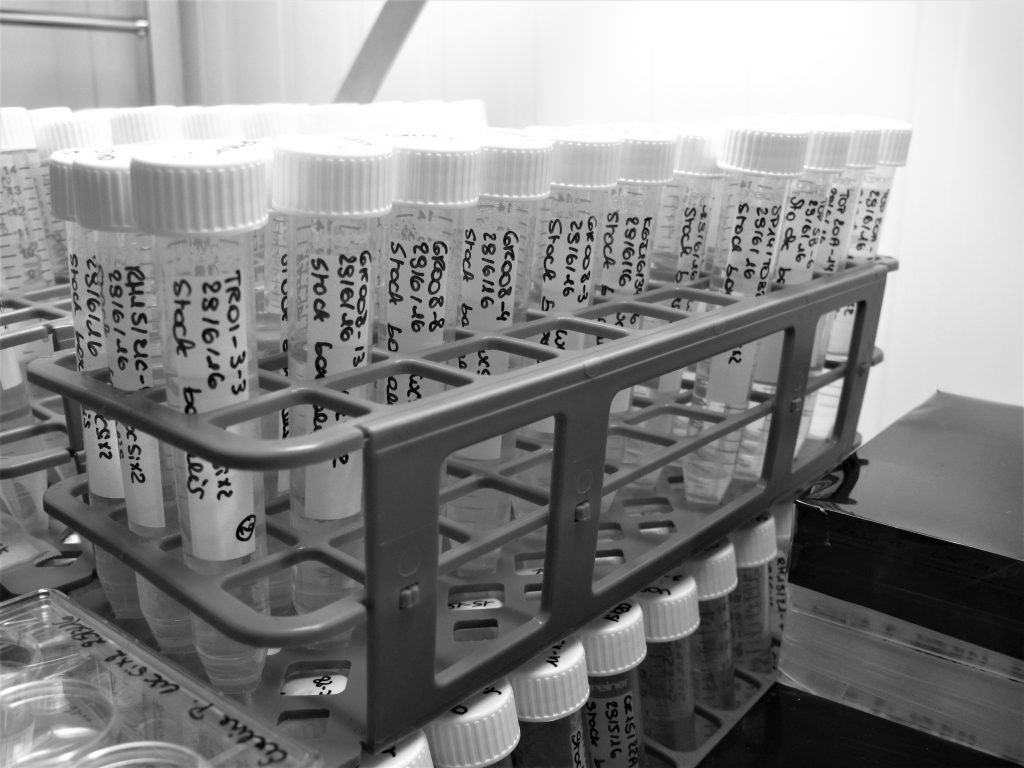 Initially, P. borealis cultures were sequenced for two fast-evolving genes (28S and cox1). In taxonomic studies of many macro-organisms and most non-diatom algae, it has become standard practice to use DNA sequences to delimit species, and consequently many tools have been developed to assess species boundaries using molecular data (Leliaert et al. 2014). Applying several of these tools, I found evidence for 126 P. borealis species within the dataset (Fig. 5). Inter- and extrapolation of the species accumulation curve suggests that the global diversity of P. borealis is substantially higher than I uncovered (Fig. 6c). There might be hundreds of species hiding across the planet! 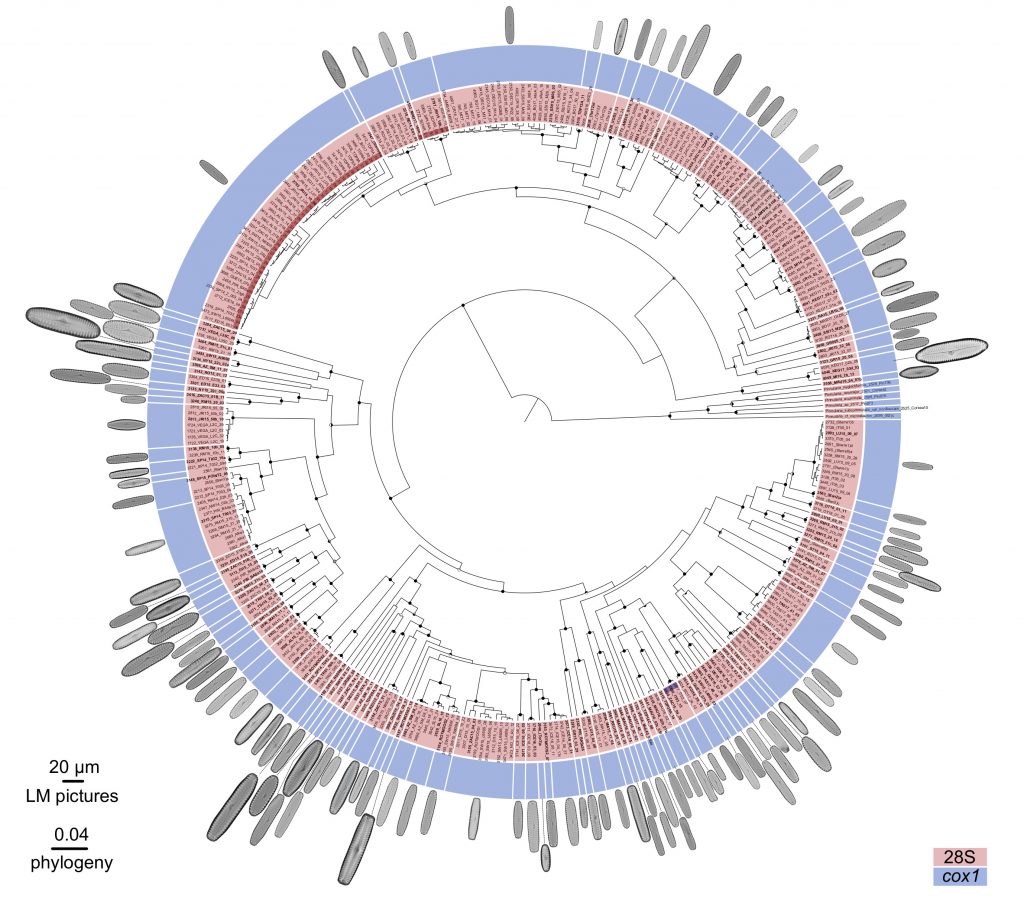 Figure 5. Consensus-species delimitation in the P. borealis species complex, based on two fast-evolving genes (28S in red; cox1 in blue). For each species, one LM picture of an oxidized valve is shown. Source: Pinseel et al. (2020).

Using the culture dataset in combination with an environmental metabarcoding dataset of the 18S gene, it became clear that the majority of the examined P. borealis species were relatively restricted in their geographic distributions (Fig. 6a). However, I also recovered two species with large geographic distributions, occurring in both hemispheres. A time-calibrated phylogeny showed that the P. borealis complex started diversifying around the Eocene/Oligocene global cooling, ca. 25-36 million years ago (Fig. 6a). This period was characterized by a profound change in climate (Fig. 6d), as the Earth shifted from a greenhouse to an icehouse state and known as a time of large-scale extinction and floral and faunal turnover (Liu et al. 2009). This period also marks the onset of a global expansion of open terrestrial landscapes (Strömberg 2011, Pointing et al. 2015), associated with colder and drier climates, in which P. borealis currently thrives. In addition, diversification in the complex seemed to be largely driven by colonization of novel geographic areas and subsequent evolution in isolation. Altogether, these results illuminate our understanding of how terrestrial diatom diversity and biogeographical patterns are generated, and suggests speciation in geographic isolation (allopatric speciation) to be a powerful mechanism for diversification of protists. 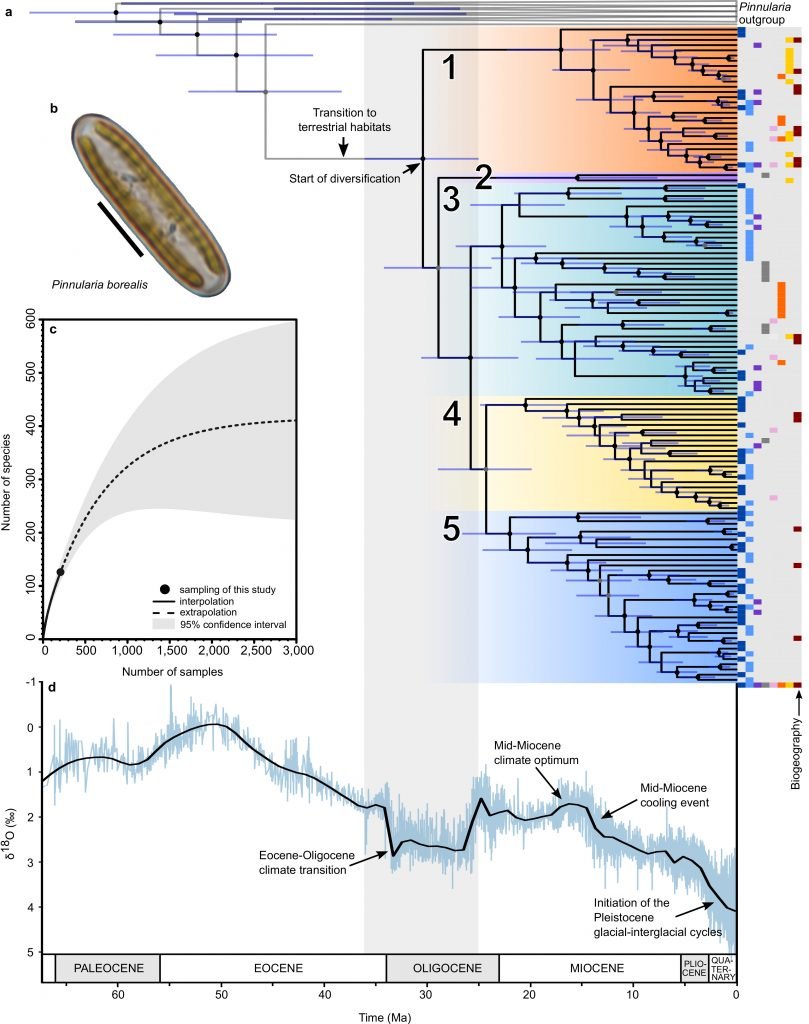 Uncovering the evolutionary history and diversity of the P. borealis complex required a global-scale sampling strategy and an extensive molecular dataset. In the 21st century research environment, it is becoming increasingly feasible to obtain such large molecular datasets of protists, which promises interesting avenues for future research. Undoubtedly, there are many exciting discoveries ahead of us!

Eveline Pinseel is a postdoctoral researcher at the Alverson lab (Department of Biological Sciences, University of Arkansas, USA), and finished her PhD at the laboratory of Protistology & Aquatic Ecology (Ghent University, Belgium) in November 2019. Email Eveline or drop a message below if you have any questions about the post.

We use cookies to ensure that we give you the best experience on our website. If you continue to use this site we will assume that you are happy to proceed.OKPrivacy policy