Lake Letsie is the largest natural freshwater lake in Lesotho (southern Africa) and is situated within the Letseng-la-Letsie Nature Reserve, at an altitude of 2400m.asl. Isolated mountain lakes, like many in the northern Hemisphere (e.g. Adams et al., 2019; Curtis et al., 2009; Larsen, 2000) are valuable sentinels of environmental change. Despite their remoteness from sources of atmospheric pollutant emissions, these aquatic systems may fingerprint the earliest signs of ecosystem response to contaminants, including organic and inorganic (e.g. nitrogen) compounds (Rose et al., 2020). Lake Letsie provides the first high-resolution, multi-pollutant records and of Spheroidal Carbonaceous Particles (SCPs), for southern Africa (Rose et al., 2020). SCP’s have no natural sources and are solely released through coal-combustion practices, providing unambiguous markers of anthropogenic pollution deposition. Lake sediments may contain these particles and harmful deposited contaminants including Mercury (Hg), from various industrial sources. This provides a natural archive to observe the temporal and spatial patterns of pollution deposited within the aquatic system (Rose et al., 2008). 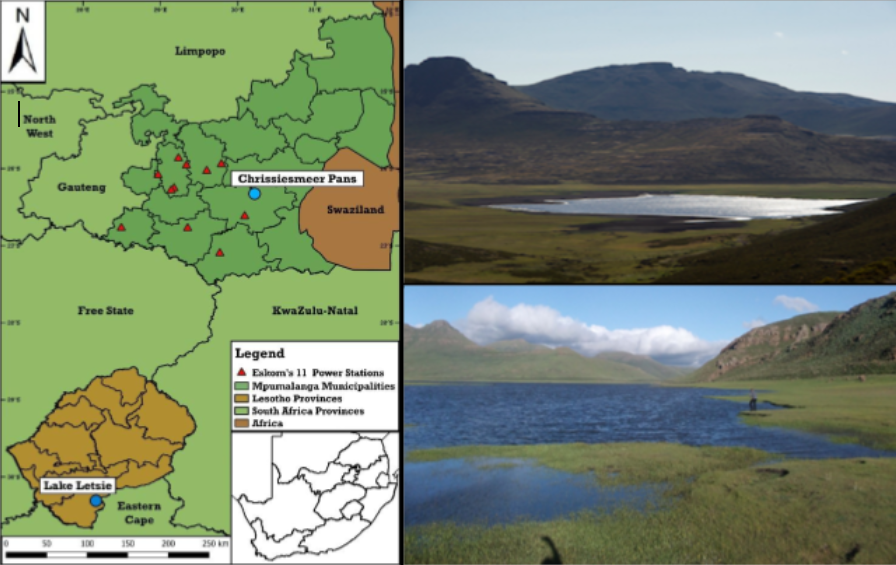 As part of my MSc. study, I am investigating the effects of pollution deposition from coal-fired power stations in South Africa over the past 150 years; on Lake Letsie and Lake Chrissie within the Mpumalanga province of South Africa. The Mpumalanga coal-belt hosts 11 of the 13 major power stations found in South Africa (Figure 1- Map) where Lesotho does not rely on coal as a source of energy production. Rose et al. (2020) examined the physical and chemical properties of Lake Letsie and highlighted the presence of SCP’s and pollutants like Hg. I am using diatoms as a proxy to determine the effects of pollution deposition within these lake systems through using various diatom species as biological indicators. This provides a temporal scale of the effects and not only for the time of sampling, as with physico-chemical measures (e.g. water depth, salinity, pH among others). Importantly, there is little diatom research in Lesotho. Diatom communities have specific environmental requirements and therefore respond sensitively and rapidly to changes and tolerate a narrow range of environmental conditions, that ultimately affects species composition (Dalu and Froneman, 2016; Riato et al., 2017). Therefore, diatom-based indices for biomonitoring can be an effective method to evaluate the ecological status of aquatic environments (Alikaj et al., 2019).

Sediment cores were extruded from the deepest point in the lake. We found a total of 72 diatom species identified from the Lake Letsie core, with 39 species occurring with more than a 2% abundance at some point within the core. Aulacoseira granulata (Figure 2) was the most dominant species (53%), with Cymbella cistula (8%) representing the second most abundant diatom species found. A. granulata is a planktonic centric diatom species that is also found in the benthos of eutrophic lakes and rivers. This species differs from A. ambigua (Figure 3A) because it has elongated linking spines (Figure 3B) on the terminal cell of the filament, forming chains and colonies. The valve diameter ranges from 4-30μm with a depth of 5-24μm. 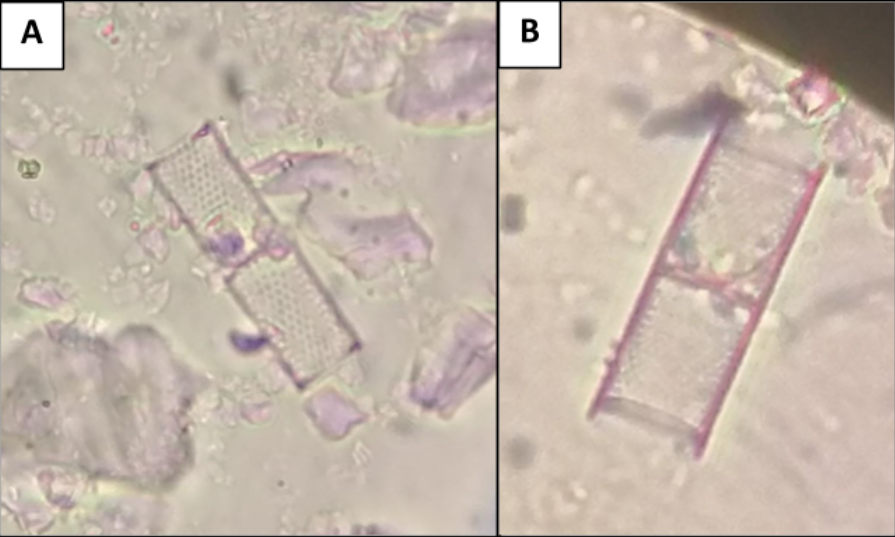 Figure 3. Aulacoseira ambigua. (3A). Showing no linking spines at the terminal ends of the filament of the two valves. (3B). Aulacoseira granulata showing slight elongated connecting spines. Images taken using a Huawei P30 lite cellphone from a Zeiss Primostar microscope at 1000x magnification.

Found in eutrophic lakes and rivers, A. granulata and A. ambigua are planktonic and benthic, preferring wet conditions, high moisture availability and enriched waters. Notably, where A. ambigua is found in both shallow and deep waters, A. granulata prefers high turbulence with the occurrence of water column mixing. Preliminary results show that the dominance of A. granulata throughout the sediment core, reveals distinct lake characteristics, including marked changes in lake levels over time. Additionally, this species is often associated with high flooding conditions and erosion events (Bicudo et al., 2016). Comparatively, in southern Africa’s highest altitude wetland habitat Mafadi (3390m.asl) in Lesotho, Fitchett et al. (2016a) found  dominance of A. ambigua, with no presence of A. granulata within the sediment core. Similarly, sediment cores within the Sekhokong Range (2920m.asl) wetland habitat (e.g. Fitchett et al., 2016b) and the 2890m.asl Ladybird wetland (Norström et al., 2018) in the Eastern Lesotho highlands, found no presence of A. granulata with little occurrence of A. ambigua and an absence altogether of planktonic diatoms, respectively. These results reveal periods of shallow to deep surface waters, with high moisture conditions but with low turbidity and mixing occurring. This distinguishes the lake systems in Lesotho from the wetland systems and is important to note as Lake Letsie was dammed in 1960; thus what may have occurred within the system prior to this, is relatively unknown (Rose et al., 2020). The presence of large proportions of  A. granulata throughout the Lake Letsie core indicates wet conditions over the past 150 years and that waters were deep enough for mixing to occur, a preferred condition for this species.  Furthermore, this reveals that there was indeed a lake prior to the erection of the dam wall and demonstrates the water-level indicator value of the planktonic Aulacoseira species. Greater interpretations are to follow these preliminary findings, through the completion of this MSc. study.

Kestrel Raik is a MSc. Candidate at the School of Geography, Archaeology and Environmental Studies, University of the Witwatersrand, Johannesburg, South Africa. Email Kestrel or drop a message below if you have any questions about the post.