This month’s diatom story revolves around a centric species that tells us about a fascinating sea level change saga over the course of millennia.

A thirteenth century story known as the Gutasaga describes how Gotland, a Swedish island in the Baltic Sea, rose from the sea at night and violently sank again during the day (taking any unfortunate residents along with it). The person to break this spell was Tjelvar; the saga tells of how he was the first to bring fire to Gotland and how this fire cleansed Gotland of its magic so that it ceased rising and sinking and became habitable.

Archaeologists have found evidence of how important the sea was to early Gotlanders. Around 400 stone ship settings have been discovered on Gotland, usually located some distance inland on what appeared to be past shorelines (Hansson, 1927). The bows of these ships were usually orientated towards the sea. Perhaps the most famous stone ship setting is known as Tjelvar’s grave (Fig. 1). In this post we explain how we used diatoms to better understand sea level changes on Gotland and go some way to explaining why these stone ship settings are now located far from the present-day coastline. 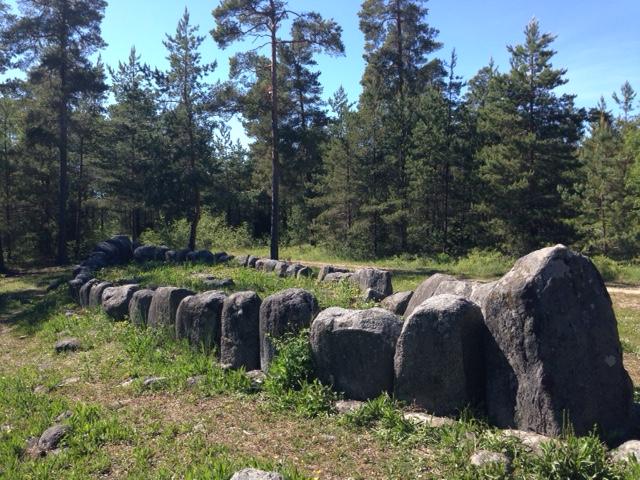 An interdisciplinary team of palaeoecologists and archaeologists from Stockholm University and Uppsala University set about to investigate whether there was any credence to the story of Gotland rising and falling beneath the waves. The history of sea level change in the Baltic is complex. Since the Fennoscandian Ice Sheet retreated northwards over Gotland 15,000 – 14,000 years ago (Stroeven et al., 2016), land in the region has been rebounding at different rates. Sea level has also changed over time. The narrow threshold to the Baltic Sea has alternated between being closed off and open over time.  The alternating connectivity with the North Sea made the salt levels and water depth of the basin rise and fall over time.

The most recent phase of the Baltic Sea (prior to current conditions), and the one that spans most of Gotland’s time as a habitable island is known as the Littorina Sea. The Littorina Sea formed around 9800-8500 years ago when globally rising sea levels inundated the Öresund strait (Berglund et al, 2005 and Björck, 2008). The rise in global sea levels was due to the melting of ice sheets in Antarctica and North America, which outpaced uplift rates around the Baltic.

To look for evidence of this inundation of the Baltic Basin and formation of the Littorina Sea, we needed to find a location on Gotland where sediments had accumulated and preserved past sea-level records. We identified a fen called Lina myr in eastern Gotland that appeared to be a good location to sample. In August 2017, we retrieved sediment cores from the fen (Fig. 2). 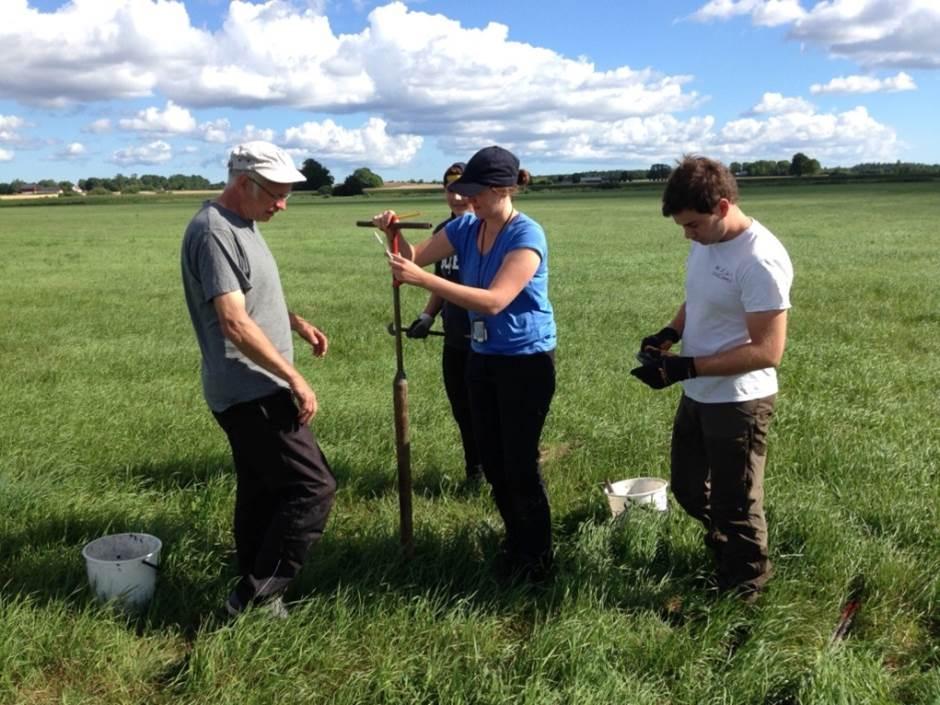 We obtained four sediment cores, each one 1 metre in length and cored to around 4 meters depth in total. The cores were made up of layers of sediment which had been deposited over time (Fig. 3). We wrapped the cores, labelled them, and took them back to our cold room in Stockholm for analyses. 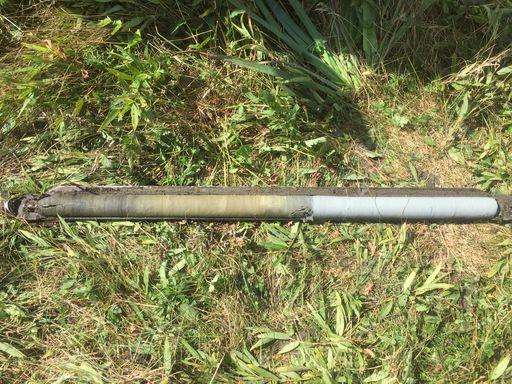 Figure 3. Sediment core from Lina myr. To the left is the top of one of the cores, from the top down the different colours represent (brown) Littorina Sea deposits, (yellowish-brown) calcareous gyttja formed in a freshwater terrestrial lake, (dark bluish-grey) a layer of sand and (pale bluish-grey) Ancylus Lake clay deposits.

Radiocarbon dating of the cores revealed that the base was almost 9000 years old. As this material accumulated over time, it was progressively younger moving up the core towards the surface. Samples were prepared from several depths of the core to investigate ancient diatom valves (silica skeletons) under the microscope. Analysis of the diatoms revealed morphologically distinct features which allowed them to be taxonomically identified. Identification and plotting of diatoms enabled us to reconstruct changes in salinity as many of species of these algae have narrow ecological preferences.

Figure 4. Abundances of the most common diatoms (displayed as percentages) in the layers of the sediment core. These graphs show how the dominant diatoms changed from 9000 years ago to around 2000 years ago. Melosira westii is highlighted in yellow (Strandberg, Barliaev et al. 2020) 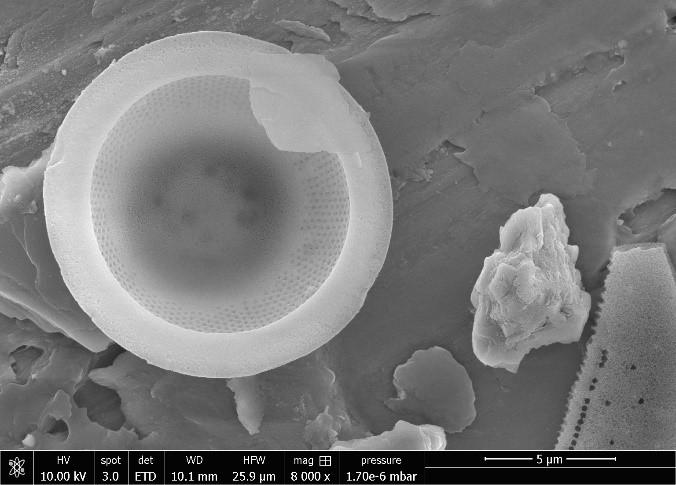 Figure 5. Scanning electron micrograph of Melosira westii (inside of one valve).

Over time, Melosira westii declined, while another species increased: Paralia sulcata (Fig. 6), a brackish-marine planktonic species. Paralia sulcata is typically found in coastal brackish-marine waters such as the North Sea (McQuoid and Norberg, 2003) and tolerates a wide range of salinity from 5 ‰ to fully marine conditions (Zong, 1997). The disappearance of Melosira westii probably indicates that the salinity increased too much for it to thrive under the new conditions. 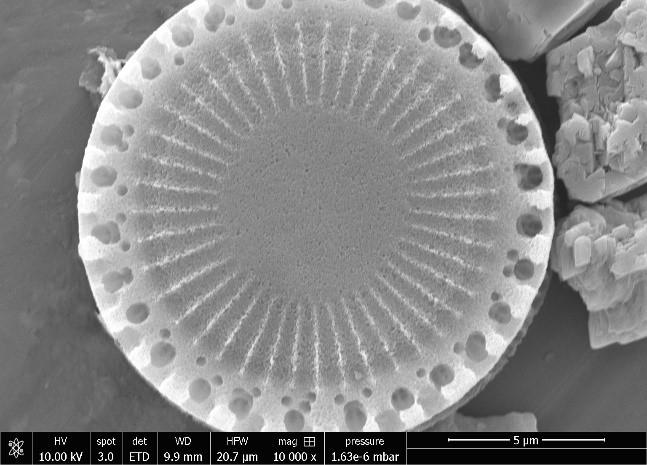 With diatoms, we were able to reconstruct a record of sea level and salinity change relative to land in the Baltic Sea. This was done by measuring the threshold of the Lina myr basin (at least 9.5 meters above sea level) and identifying from the diatom data the periods when the Littorina Sea stage began (L1) and the two periods when the salinity was the highest and the water was likely to be deepest (L2 and L3). These latter two phases are identified through peaks in the relative abundance of diatom Paralia sulcata and peaks in bromine, an element which is often found in seawater. Figure 7 shows L1, L2 and L3 stages of the Littorina Sea relating to periods of higher sea level and compares this with other sites from around the Baltic. 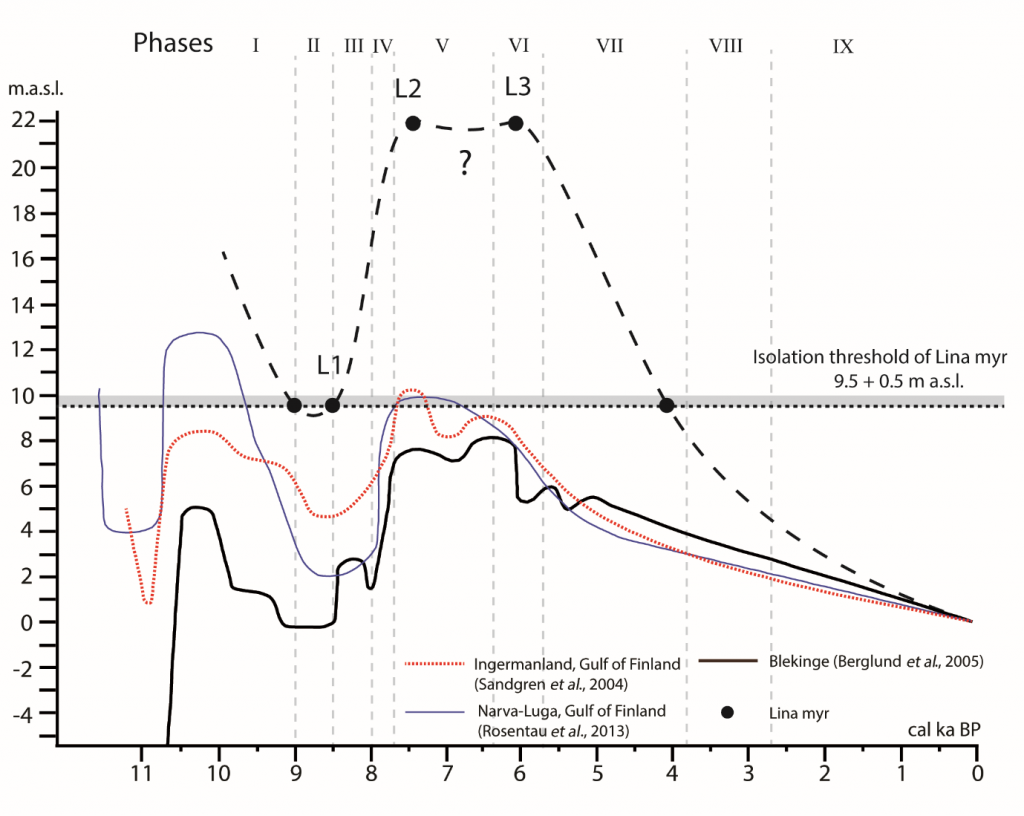 Figure 7. A tentative shore displacement curve constructed from investigations of the master core from Lina myr and comparisons for other studies around the Baltic Sea. L1, L2 and L3 represent transgressional (sea level rise) sub-phases of the Littorina Sea.

Records from around the Baltic show similar trends of sea level change throughout the Littorina Sea phase. Although we can be confident that Gotland did not rise and sink daily, this research has shown that there is a grain of truth to the Gutasaga and that sea levels and shorelines were highly variable on Gotland over the last 9000 years.

Nichola Strandberg is a PhD student at the University of Southampton (UK). Email Nichola or drop a message below if you have any questions about the post.