I discovered the fascinating world of diatoms during my undergrad years in Argentina. After finishing my biology degree, I spent the early years of my professional career in Chile and USA, where I studied benthic diatoms and the temporal variability of diatom populations in low-latitude, marine upwelling systems. I moved afterward to Bremen (Germany), where I did my PhD on the temporal variations of marine diatom assemblages. I have spent most of my professional career in Germany, working as a micropaleontologist together with geologists. This gave me a different perspective on the understanding marine (paleo)biogeochemistry and the use of diatoms in a broader scientific context. 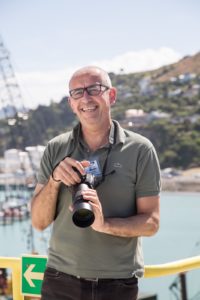 My main research interests are (i) evolution and dynamics of Neogene paleoclimate, (ii) effects of changes in biodiversity and climate on marine ecosystems and biogeochemical cycles, and (iii) the role of diatoms in the marine productivity and the silica cycle of the oceans. Since my early years as a scientist, I also devote part of my research efforts to the study of benthic diatoms, in particular the genus Cocconeis Ehrenberg.

As part of my research on paleoclimate and paleoceanography, I use marine diatoms as tools for reconstructing past climate and oceanographic conditions and generate high-resolution diatom records for Neogene paleoclimate (for more information about my research see publications). I compare my own results on the species-specific composition of the preserved diatom assemblage with other proxies, such as bulk sediment components, isotopes on diatoms, alkenones and major and minor elements. I have sailed on 13 oceanographic expeditions, these including the Atlantic, Pacific and Indian Oceans, and the Mediterranean and Ross Seas. My experience on Cenozoic diatom stratigraphy mainly relates with my participation on expeditions of the International Ocean Discovery Program (IODP). On each expedition I have participated as “Biostratigrapher (diatom specialist)”, have gained significant knowledge and expertise on diatom-based biostratigraphy from different ocean basins at high and low latitudes, and have learnt to interpret and correlate stratigraphy with that delivered by other microfossils and paleomagnetism. My on-board and home-lab biostratigraphic work requires a sound knowledge of diatom taxonomy. In this regard, my experience with diatom taxonomy and (paleo-)ecology is not only limited to low- and mid-latitudes areas of the ocean, but it also extends to southern polar waters and the Subarctic Atlantic.

As a current council member of the ISDR, I am convinced that the society plays an important role in the actual science world. Since my first IDS in Tokyo in 1996, I have attended several IDS and believe that this get-together is not only important from the scientific point of view, but I also enjoy seeing colleagues from all over the world every few years again. Early 2016, I started the IDSR site on Facebook. This collaborative effort has strongly increased the online visibility of the society. I am particularly happy about the initiative of the young diatomologists and I strongly support this effort.