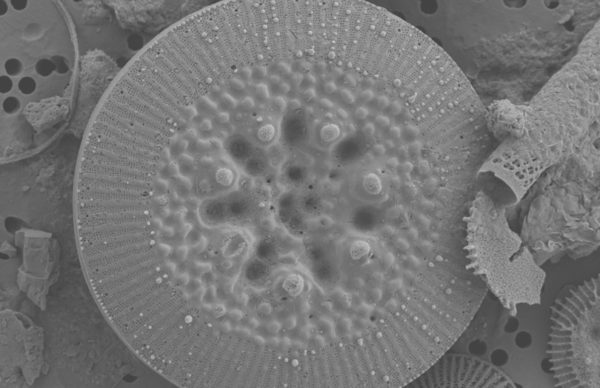 Once upon a time, there was a lake called Kinneret. Storytellers are not sure if this lake was called like this, because it is shaped like a harp (which is “kinnṓr” in Hebrew) or because a bronze-aged city close by was called Kinneret. Perhaps you may have heard about this lake (also called Sea of Galilee or Lake Tiberias), as the lake and its surroundings have served as an important backdrop for much of human history in the region, especially in biblical times. A good example is the miracle of Jesus walking over the lake. A few facts: Lake Kinneret is an old lake, lying 210 m below (!) sea level in the northern part of the Jordan Rift Valley, which is still tectonically active (Figure 1). The lake represents the largest freshwater body in the whole region. As you can imagine, this lake plays therefore an important role for the natural fresh-water supply for the entire region since prehistoric times and human activities over time might have had a marked effect on the lake ecosystem.

During my PhD studies, I investigated the ancient and modern diatom flora of Lake Kinneret. On one hand, I wanted to investigate if rapid changes in climate during the past 9,000 years influenced diatom diversity. On the other hand, I wanted to know if human settlements and increased agricultural activity had an impact on the ecology of the lake.

To answer these questions, I used diatoms – single-celled, siliceous algae – which can occur in almost every aquatic habitat (and also damp terrestrial biotopes), where light penetration is sufficient to support photosynthesis. Many diatom species are specialised to inhabit particular kinds of habitats (e.g. floating in the water, live attached to plants or rocks) and have specific preferences that give researchers useful clues about several important environmental parameters such as light, moisture conditions, temperature, current velocity, salinity, pH, oxygen and inorganic and organic nutrients (van Dam et al., 1994). Therefore, the quantitative analyses of modern and fossil diatom assemblages, often preserved in lake deposits, can be used to show (a) how lake characteristics have changed over time, (b) the relation to human influences, (c) past climate conditions (i.e. by reconstructing lake-level variations through time), and d) past water quality conditions and palaeoenvironments.

In March 2010, my colleagues of the University of Bonn and several Israelian researchers recovered two parallel sediment cores from the deepest part of Lake Kinneret (Figure 2). After weeks of sample preparations in the laboratory, diatom samples were ready to count. During the counting of diatoms from the sediment cores, I came across larger populations of an unknown Cyclotella species (Figure 3), which often occurred in assemblages dominated by the classical Cyclotella ocellata type. After detailed light and scanning electron microscope (SEM) observations, and no fitting identification based on the available literature, we described it (based on its morphological features) as a new species called Cyclotella paleo-ocellata Vossel & van de Vijver (Figure 4, Vossel et al., 2015).

What do you need to know about Cyclotella paleo-ocellata (Figure 4)?

Figure 4: Photographs of the type population of Cyclotella paleo-ocellata from the bottom sediments of Lake Kinneret taken under a light microscope (left) and external SEM views (right).

Human impact on the ecosystem of Lake Kinneret in the past 9,000 years

Detailed diatom investigations during my PhD studies revealed that major shifts in the diatom community during the early and mid-Holocene were driven by changes in lake level due to regional climate variability (e.g. Holocene rapid climate changes (RCC’s); Vossel et al., 2018). The diatom data indicate that fluctuating human settlement size and activities around Lake Kinneret during those time periods (Langgut et al., 2013, 2015, Schiebel and Litt, 2018) seems NOT to have a remarkable impact on the lake’s ecosystem and its trophic state.

However, an increase of human occupation and intensity during the Hellenistic and Roman period around Lake Kinneret (Anderson, 1995, Chancey and Porter, 2001) showed the first effects on the lake’s ecosystem, which is well reflected by major shifts in the diatom species composition and other palaeo-proxies (e.g. pollen, mineralogy, green algae, archaeology; for details see Vossel et al., 2018). The complete disappearance of two diatom species, Stephanodiscus galileensis Håkansson & Ehrlich and Cyclotella paleo-ocellata Vossel & van de Vijver (both first described in bottom sediments from Lake Kinneret), at around 2,300 yrs cal BP possibly marks the beginning of this human-induced impact and the turnover from an oligotrophic fossil assemblage to a meso- to eutrophic modern diatom assemblage. Intensive agriculture activities, e.g., the replacement of oak woodland with olive plantations (Schiebel and Litt, 2018) or the establishment of major irrigation systems (Lemche, 2015), led to intensive nutrient enrichment in the lake. This also favoured an increase in dinoflagellates and green algae in the phytoplankton biomass volume of Lake Kinneret (Pollingher et al., 1984) and led to the permanent replacement of the “typical” diatom flora in modern times.

Sadly, there is no “happy ending” for Cyclotella paleo-ocellata in this story, as it got extinct possibly due to human-induced nutrient enrichment in the lake during the Roman period. C. paleo-ocellata was described and separated from other similar taxa simply based on morphological characters. As C. paleo-ocellata is at present only known from the subfossil bottom sediments of Lake Kinneret, DNA analysis could not be conducted to reveal its molecular fingerprint and genetic relationship to the Cyclotella-ocellata species complex.

Nevertheless, the results of my PhD thesis clearly showed that diatoms datasets provide a powerful tool for Holocene palaeoenvironmental and climatic reconstructions in the southern Levant region, especially if they are interpreted in combination with multi-proxy datasets. In the southern Levant there has been surprising little Quaternary diatom research to date, therefore my investigations strongly emphasize the need for further analysis of long, lacustrine diatom records with a robust age-control in the region.

* Institute of Geosciences and Meteorlogy, University of Bonn, Bonn, Germany

Email Hannah or drop a message below if you have questions about her post. Visit Hannah’s website to know more about her research.

Anderson J. (1995) The impact of Rome on the periphery: the case of Palestina–Roman period (63 BCE–324 CE). In: Levy TE (ed) The archaeology of society in the Holy Land, London. London: Leicester University Press, 624.

Pollingher U, Ehrlich A & Serruya S. (1984) The planktonic diatoms of Lake Kinneret (Israel) during the last 5000 years—their contribution to the algal biomass. Proceedings of the 8th International Diatom Symposium. Koeltz, 459-470.